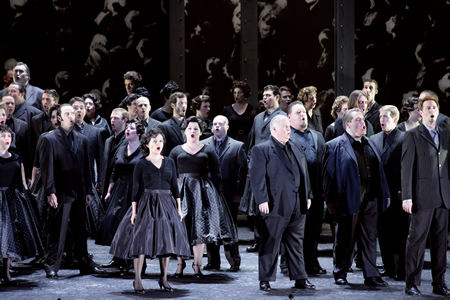 Why should musicals own the review format? Anthony Freud at Houston Grand Opera has come up with a way for opera to get in on the fun with Chorus!, a fully staged review of several show stopping famous and not so famous group sings. And it works for the most part, with clever, dramatic and sometimes sneaky transitions from one piece to another.

Chorus! opens with a bang with the singers milling about on stage, with the house lights still on, against a backdrop of Arthur Siegel’s 1930 photograph of strikers. The power of numbers is already at work. In a sudden stroke, house lights go down, stage lights come up, and the HGO chorus bursts into “Epigraph” from SergeiProkofiev’s masterwork War and Peace. It packs a punch that sets the pace for the rest of the show.Excerpts from Prokofiev, Wagner, Britten, Stravinsky and Verdi worked remarkably well with lighter fare such as Richard Rogers, Gilbert and Sullivan, and Offenbach. Set and costume changes were more of the conceptual kind, and some of the segues proved downright amusing. Soloists Ryan McKinny, Caitlin Lynch, Shon Sims, Jon Kolbet and Octavio Moreno added depth and diversity.

The show was not without a few missteps. Some consideration of a through line was attempted with a pair of actors that kept wandering about, looking for another show I think. That didn’t work at all, but didn’t stop the fun either. A flying couch designed to look like a set of red lips floating over the stage took an odd turn, as did the antics with a guitar by the non-dancing dancer in Rogers’ “Alleluia” from The Sound of Music. The tossing about of the fringed red bikini clad “dancer” felt a bit too Vegas to match Orff’s “O Fortuna.” Handel’s “Hallelujah Chorus,” preformed in marching band style, seemed completely out of place.

The good news is that the HGO chorus, under the director of Richard Bado, never sounded better. What a great idea to give them a deserved spotlight. Johan Engels’ dressed this production in broad strokes, creating compelling visual links between each piece. The last two selections, Rogers’ “You’ll Never Walk Alone” from Carousel and “Make Our Garden Grow” from Bernstein’s Candide, evoked a potent and poignant message for our times, and never failed to remind us of the power of crowds when it comes to opera.