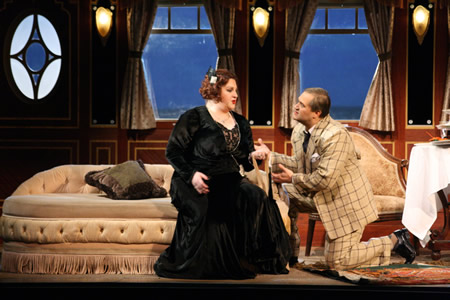 The Abduction from the Seraglio

Tamara Wilson and Paul Groves in The Abduction from the Seraglio. Photo: Andrew Cloud.

There’s poetry in Houston Grand Opera’s recent pairing of two Mozart operas, The Abduction from the Seraglio, Mozart’s first hit, and The Magic Flute, his last. The two singspiel operas deal with moral issues amidst human mischief with a good dash of comedy.

The Abduction from the Seraglio can be seen as a great warm-up act of The Magic Flute to follow nine years later. It’s a comic gem of a piece, albeit a tad politically incorrect. Due to the recent defeat of the Ottoman empire interest inTurkey was all the rage. Emotions are mixed here, with the comic character and buffoon, Osmin, who has a particular interest in keeping women as slaves, and Pasha Selim, the savvy woman thief with a soft heart, at least at the end.

Originally set in a harem, director James Robinson sets his opera on a train, the elegant Orient Express to be exact. It’s a stroke of genius and a wonderful solution to the unruly locales of the original. Plus, it serves to compress the plot visually, allowing many things to happen at once. The cozy enclosure also tightens the drama as well. It’s especially effective during the blotched escape scene. To make it all the more exciting, the train appears to be moving, sometimes at quite a clip.

Soprano Tamara Wilson comes into her own in the role of Konstanze, Pasha’s favorite conquest. Bass Andrea Silvestrelli howls with a masterful authority as Osmin, the Turk who fancies torture and a disdain for the freedoms of western women. As Belmonte tenor Paul Groves delivers both a notable and noble performance as Konstanze’s love and rescuer. Heidi Stober’s bright performance as Blonde sparkles and works best in her scenes with the Osmin. Nicholas Phan is wonderfully spunky as Pedrillo. The entire cast display a deft flair for comedy. Smart period costumes by Anna R. Oliver and the clever train interiors by Allen Moyer, add to the shiny polish of this performance. Paul Palazzo illuminates the proceedings nicely, adding to the neatly-contained feel of the production. William Lacey guided the HGO orchestra in a fine performance.

There’s even more star-kissed magic in HGO’s production of The Magic Flute, one of Mozart’s masterpieces and most performed operas of all time. With equal parts fantasy and philosophy, fabulous music, and vivid characters, there’s everything you’d ever want in an opera and more. And the more part is where HGO comes in with this inventive production directed by Kevin Newbury. The whole experience seems to take place on a new plane of the imagination, that dwells more in the logic of dreams and parable. The spirit of enlightenment reigns boldly here.