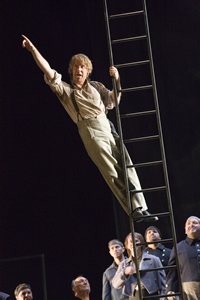 In these dark days of evil people and more-evil people, the moral climate of Benjamin Britten’s Billy Budd is clear cut. William Budd is purely good, a near-Christ figure, who takes his lot in life with the stalwart backbone of a consummate seaman. Then there’s the troubled Master-at-arms, John Claggart, the Judas of the lot; he’s one smarmy bad guy. Claggart, fearful of Budd’s brilliance, falsely accuses him of organizing a mutiny. Unable to defend himself due to a stammer, Budd takes a sole swing at Claggart and knocks him dead. The penalty is death. There’s no gray zone at sea. Holding the middle ground, and at the crux of Britten’s Budd, is Captain Edward Fairfax Vire. Knowing full well of Budd’s innocence, he follows the laws of the sea, ignoring the laws of the heart. He goes to his grave with the stain of Budd’s wrongful death as his reminiscences bookend the opera.

Houston Grand Opera launches a multi-year Britten cycle with this glorious production of Budd. Based in Herman Melville’s classic tale and adapted by E. M. Forster and Eric Crozier in 1951, the themes of Budd strike a potent chord with today’s national and world affairs. With an all-male cast Budd is one stunning sight to behold. Andrew Kennedy’s Captain Vere is complex, heartfelt, and deep. Kennedy, making his HGO debut, holds us captive in his conscience, we feel and hear his regret. Phillip Ens, also making his HGO debut, portrays the ambiguous at-war-with-himself Claggart with amble swagger and dimension. Daniel Belcher, with his bright yellow mane, inhabits Budd in all his goodness and innocence. Belcher’s luminous presence is in sharp contrast to the monochrome seascape. He’s haunting in his final aria before his death, after which he goes willingly, at peace with his fate. His crisp performance give Budd much of its punch. HGO Studio member Liam Bonner (Mr. Redburn) and former studio alum Ryan McKinny (Mr. Flint) deliver lively performances.

Neil Armfield’s direction kept close to the core of the opera and contained some breathtakingly beautiful stage pictures. Brian Thomson’s unusual set gives this production its curiosity, The mighty H. M. S. Indomitable is represented by a gigantic (four tons to be exact) hydraulic rectangle that raises, lowers, tips, and leans relentlessly throughout the entire piece. Twice, it solos with nothing else happening on stage. Yes, it does make one feel as if one were at sea. No, it doesn’t remotely resemble a ship, yet the structure grows on you in its strange, silent, and abstract immensity. For certain, it’s a potent visual metaphor for the slippery slope of the moral dilemma that lies at the heart of Budd. The surrogate ship looks at its best when its covered with a swarm of singing shipmates. The chorus, prepared by Richard Bado looked smashing, sounded heavenly, and made Budd a wonder through and through. Nigel Levings’ lighting design conjures the fogged-filled seascape, and Carl Friedrich’s period costumes contrast nicely with the austere set. Brian Byrnes’ fight direction adds a visceral and unruly edge, characteristic of a too-long-at-sea culture. The positively charming chorus of mini-sailors under Karen Reeves direction made for the evening’s few softer moments. Patrick Summers led the Houston Grand Orchestra in yet another outstanding performance.

In the opera’s last moments the ship/structure transforms back into a plain flat platform. Vere, an old and troubled man, creeps away into the darkness dragging the unsurmountable burden of his actions. There’s a lesson there.