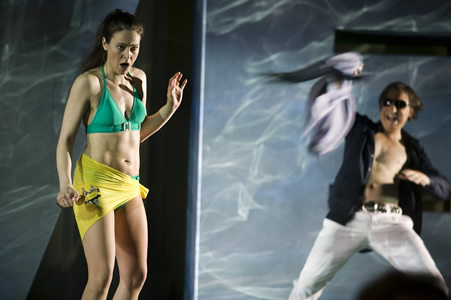 Following the bleak Don Giovanni in the latter-day career of the prodigious Wolfgang Amadeus Mozart, Così Fan Tutte is, in its own way, equally dark. Under the guise of a comic Opera scored in Mozart’s characteristic, chirpy musical style in this genre, Mozart and regular librettiticist Lorenzo Da Ponte present a fairly savage critique of contemporary morality that in many ways works as an auto-critique of the genre, as well as a broadside against humanity itself.

The plot revolves around the misadventures of two affianced couples, Ferrando and Dorabella and Fiordiligi and Guglielmo, whose fidelities are tested by the machinations of friend Don Alfonso and servant Despina. Alfonso’s motivations are vague, but his purpose is clear, a Mephistophelean abject lesson in human nature straight out of Don Giovanni. Basically, after listening to Ferrando and Guglielmo pontificating on the beauty and purity of their respective beloveds, he makes a bet with them that he can prove that women cannot be trusted. He elicits the men’s agreement to pretend they have been called away to war and then produces them in disguise as two handsome strangers and has them attempt to seduce each other’s fiancé. After some initial resistance, the ladies succumb, prompting a marriage interrupted by the ‘return’ of the original boyfriends, and though a ‘happy ending’ is thrown in, the cold comfort of the final song suggests only that ultimately all human beings are flawed and fickle and it’s best to live with it. Nice.

The original production of Così Fan Tutte was dogged by the death of Mozart’s patron, Emperor Joseph II in 1790, resulting in a short run and a quick disappearance from the repertoire. The opera remained comparatively obscure for many years, with many conductors avoiding it on moral grounds, clearly unhappy with the subversive mix of light comedy and dark drama. After some years of modified (essentially censored) productions, its success and popularity today is entirely due to a postmodern empathy with its despairing core when the original libretto re-entered the canon in the 1940s.

Opera Ireland’s production comes with an interesting choice of director, Pan Pan theatre company’s Gavin Burke, fresh from the acclaimed Chinese version of Playboy of the Western World. Burke clearly relishes the hard edge of Da Ponte’s libretto, presenting a contemporary morality play complete with iconographical trappings and a sexual directness that make it work for today. Instead of Lords and Ladies twittering about in drawing rooms, Burke gives us soccer players and their girlfriends; the milieu of ‘player’s wives’ familiar from soap opera. After an initial locker-room scene featuring the male chorus in jock straps, the production continues to emphasise the energy of the body as well as the voice. There is no shy suggestion here that swapping kisses and portraits in the garden are venal acts of infidelity. Burke makes it clear that sexual congress is afoot as explicitly as he dares given that this is still the Dublin opera scene. We’re not talking about anything too radical here, but it is unlikely that you’ll see another Fiordiligi singing her part in a bikini, or have Guglielmo sing about the potency of his ‘moustache’ while grabbing his testicles as he gyrates shirtless on a raised platform.

Like this season’s other production, Don Pasquale, Così Fan Tutte is presented in an atypical venue on a more restricted level of opulence than usual, and Burke, like Dieter Kaegi with Pasquale, has made a virtue of his limitations. Of the two, Così seems to have been given perhaps more time and attention to at least approach the standard production values. The staging is actually pretty simple overall, but very effective. A huge set of wooden letters spelling ‘Love’ makes up the bulk of the setting, and these are moved around and flopped over to create different arrangements of the onstage space. A large sheet of beaten metal initially confronts the audience and forms the back wall of the soccer players’ locker room, but elegantly tips back under Thomas Marker’s lights to create shimmering, reflective under-lighting; throwing patterns of illumination on the walls of the theatre. Not that any of this really matters in that the core of any Opera is music and song, as Kaegi’s Pasquale also reminds us, and on this level Così excels.

Mozart himself is probably not even up for discussion or analysis in terms of the musical accomplishment of the piece. The composer brings his usual density (‘too many notes’) to a score which seems to provide an almost unique balance between characters, making it very much an ensemble piece rather than an opportunity for any individual to deliver a star turn. American Mezzo-Soprano Mary Bowen is a lusty Dorabella, Italian Soprano Sara Galli is a fragile yet formidable Fiordiligi, Italian Tenor Federico Lepre makes a wonderful transition from brash to heartbroken as Ferrando, and Austrian Bass-Baritone Josef Wagner is particularly funny when groomed up in disguise to look like an Albanian soccer star. All four of these performers have strong voices, create vivid and believable characters through their acting skills, and play in any combination very well. Austrian Baritone Peter Edelmann and Irish Soprano Sandra Oman round out the sextet given, as noted, more or less equal time to establish themselves, and both are again good individually and in concert with the others. Italian conductor Gianluca Febo helms from the orchestra pit with precision and passion, and helps his singers to pull of the balancing act essential to the effect. No one is above anyone here, morally or vocally, and though the misogyny inherent in the translation ‘women are like that’ sung by Don Alfonso is pronounced, the sense of an even spread of blame firmly implicates the audience in accepting our own descent into apathy and amorality. Strong stuff, and well worth seeing.