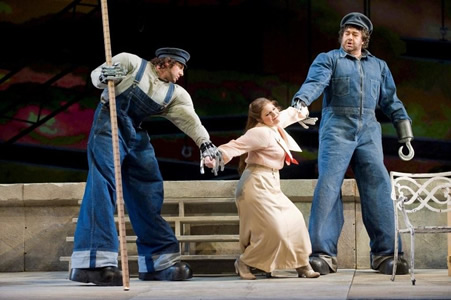 Opera in one act by Richard Wagner

You win some, you lose some. What Francesca Zambello won in her ambitious reworking of Richard Wagner’s prelude to the “Ring Cycle” into an American landscape was a new clarity of the tale itself, with its focus clearly on greed for gold and power. What it lost was the grandeur and the gravitas of a mythic struggle. It is all very well (perhaps actually better) to have the Rhine maidens cavorting about in what looks like Yosemite Falls like a trio of dance-hall girls when Alberich (Richard Paul Fink) stumbles upon them while panning for gold. In fact, it’s rather wonderful because you know that, hidden under the rushing water is the precious substance he seeks. But, when the gods enter Valhalla, that glorious and hard-won piece of real estate that forms the other linchpin of the plot, it is as if they are walking up the gangplank of a cruise ship (a gangplank that looks suspiciously like a model for the new Bay Bridge). The music is the same but the event is trivialized by having the principals giggling and quaffing champagne. One of the most sublime moments in all opera is utterly thrown away.

This production is a joint venture with the Washington Natl. Opera, with the entire Ring scheduled for San Francisco in 2011. Who knows? It is several generations later in the plot and by that time we may get a Siegfried who looks like Gavin Newsom (also not so bad) and Brunnhilde wielding a cell phone instead of a spear. We’ll have to wait and see. Meanwhile, “Rheingold” depends heavily on Jan Hartley’s projections to set the mood. In the beginning, during that famous longest chord in the world, the audience sees swirling waters morphing into a primordial ooze and then opening up to a sky with swirling planets. Good enough but during all the orchestral interludes, including some of the most sublime music Wagner ever penned, we get other amorphous projections until the whole device becomes rather tedious. Worst of all, the scene changes going on behind the screen were less than seamless. Even from Row R one could hear thumps and bumps and an occasional shouted order that were definitely not written into Maestro Donald Runnicles’ score. One almost could hear Wagner himself – such a sonic perfectionist that he designed his Bayreuth opera house for listening, not comfort, with wooden surfaces for everything including the seats – turning over in his grave.

Other effects were fine. The giants who built Valhalla (Andrea Silvestrelli as the lovesick Fasolt and Gunther Groissbock as his more practical and violent brother) make a grand entrance, lowered on a steel beam. The slaves in Nibelheim, forced to forge Alberich’s stolen gold, are not mock-dwarves as in other productions, but children, calling to mind the actual child labor abuses of the times. Jennifer Larmore is a chic Fricka, rather than the matronly nag she usually appears to be. And she sings beautifully. But Mark Delavan’s debut Wotan made the leader of the gods more of a spoiled dilettante than anything imposing. Ditto for his brothers-in-law Donner and Froh (Charles Taylor, Jason Collins). Tamara Wapinsky was a nice Freia, the goddess of springtime and youth who is bartered to the giants as payment for their labor, only to be ransomed back with the Rheingold. And somehow, in the brief time of her captivity, Zambello arranges for her to have fallen in love with Fasolt, hulking and stupid as he may be. When Fafner strikes him dead in order to get the gold for himself, she carries on like a bereaved widow.

The vocal and dramatic honors of the night go, not to the gods – the supposed principals – but to lesser beings, the clever, mischievous demi-god Loge (Stefan Margita) and two sub-humans, the Nibelung Alberich and his cringing brother Mime (David Cangelosi). This show really only took off during the scene down in the mines when the three of them are sparring for supremacy. Catherine Cangiano, Lauren McNeese and Buffy Baggott were charming Rhine maidens and Jill Grove was the gloomy Earth goddess Erda, who seemed more intent on seducing Wotan than warning him of the dangers to come. Runnicles, a Wagner master, and the orchestra did their best in the pit but, when you stop to think about it, what was lost in the busy shuffle of this “Rheingold” was the music. I’m not sure what we got in return was a fair trade.