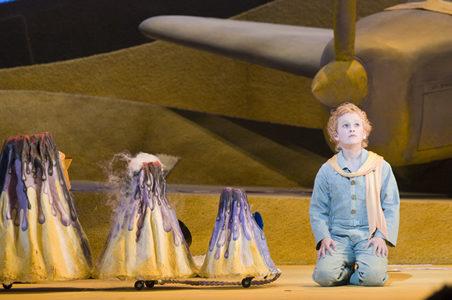 After the book by Antoine de Saint-Exupery

“A rose is a rose is a rose,” Gertrude Stein famously said but readers of Antoine de Saint-Exupery’s children’s classic “Le Petit Prince” might disagree. The rose that you tend, the rose that you love is different from all the others in the universe. And I say universe advisedly as Saint Exupery’s small hero travels the galaxies in search of the meaning of life – which, of course, was the rose right under his nose all the time.

In a rare but happy collaboration, San Francisco Opera’s splendid production of Rachel Portman’s operatic treatment of the tale is being presented by Cal Performances in Berkeley. And it’s not just for kids, although there were many in attendance on opening night. Oscar-winner Portman, who comes to us by way of Hollywood (“Emma,” “Chocolat,” “The Cider House Rules”), writes very listenable music. Nicholas Wright’s libretto is simple, clear and faithful to the book. The voices were splendid, the children’s chorus adorable, the costumes inspired and the set and special effects top drawer. All that and it’s only two hours long. What’s not to like? One would be surprised if “The Little Prince” does not take up permanent residence in the repertory right next to Humperdinck’s “Hansel and Gretel” and Ravel’s “L’Enfant et les sortileges.”

For those who may not know the story, it’s a fable about a stranded aviator who meets a little boy wandering in the desert. (Saint-Exupery himself was a pilot who mysteriously disappeared during a WWII reconnaissance mission over Nazi-occupied France). The child is ruler of a far-off asteroid consisting of three volcanoes, some invading baobab trees and a beautiful rose. The Little Prince tends them all with care but when the Rose, a vain, silly creature, sends him on a mission to learn about life, he takes off (literally, in this production, borne aloft by flying cranes). He visits several planets and meets a busy businessman, an autocratic king, a lamplighter caught in an endless surrealistic routine, a Vain Man (Thomas Glenn in a very funny music hall routine) and a drunkard.

Having learned all he needs to know (or doesn’t need to know) from these, he heads to Planet Earth, where he encounters a slithery Snake (Glenn again), a wise Fox (Marie Lenormand) and the aforementioned pilot. Romanian baritone and former Adler Fellow Eugene Brancoveanu fills the pilot’s boots wonderfully. Good looking and sure of voice he is the human anchor for all the fantasy creatures around him. Tovi Wayne, who will share the role with Tyler Polen, was a sweet and energetic prince. In addition to these and Glenn, fine work was done by Ji Young Yang as the rose and Tamara Wapinsky as Water (yup, I bet you didn’t know water could sing but it does and beautifully). Members of the San Francisco Girls Chorus and San Francisco Boys Chorus played stars, roses and the children who listen to the flier relating the tale. The whole thing was under the baton of Sara Jobin who conducted SF Opera’s recent “Appomattox” downtown.

And it was gorgeous. The lesson learned by the aviator and the prince is a simple one: “Anything essential is invisible to the eye … the heart sees clearly. Eyes are blind. Look only with the heart.” It is strongly suggested that you bring both your eyes and your heart to San Francisco Opera’s “The Little Prince.” Oh, and don’t forget your ears.

(16313)
$11.50 (as of January 25, 2021 - More infoProduct prices and availability are accurate as of the date/time indicated and are subject to change. Any price and availability information displayed on [relevant Amazon Site(s), as applicable] at the time of purchase will apply to the purchase of this product.)

(10952)
$4.79 (as of January 25, 2021 - More infoProduct prices and availability are accurate as of the date/time indicated and are subject to change. Any price and availability information displayed on [relevant Amazon Site(s), as applicable] at the time of purchase will apply to the purchase of this product.)
related posts