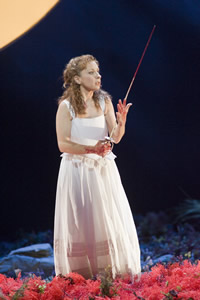 June is the month of brides but the one walking down the aisle at San Francisco Opera House these days has a bit of blood on her hands. Plus she is stark, raving, out of her mind insane. No matter, she sings like an angel.

So many things, especially in the entertainment field, fail to live up to their hype. But the long-anticipated San Francisco debut of French soprano Natalie Dessay in her signature role of Lucia is not one of them. In fact, she, and the entire production currently on the stage of the War Memorial Opera House exceed even the wildest hopes. Dessay is glorious; the rest of the cast very good and the orchestra, under Jean-Yves Ossonce, fine. This is one June wedding you won’t want to miss.

Donizetti’s war horse has been a staple of the operatic repertoire ever since its debut in Naples back in 1835 when Vesuvius was rumbling and Europe was putting itself back together after the Napoleonic wars. In our own time it has been bread-and-butter for Dame Joan Sutherland, with more than a little competition from the late, great Beverly Sills. But Dessay’s Lucia is unlike that of either of those two worthy divas, perhaps unlike any that have gone before her. She begins as a mischievous child, teasing her attendant Alisa (Cybele-Teresa Gouverneur) and skipping over the rocks on the heath as she awaits her lover. Her subsequent torment, as her brother tries to force her into a politically advantageous marriage, is moody, rather than furious, and her madness – after she stabs her intended bridegroom — is a gentle ethereal wandering into the happier days of the past. It is a theatrical tour de force but a quiet one, finely nuanced and a welcome change from the wild mad scenes of yore.

That’s the plot in a nutshell, by the way. All we need is to introduce the other characters to fill in the blanks. Edgardo, Lucia’s true love and her brother’s mortal enemy, is well-sung by Giuseppe Filianoti who chews up the scenery in true Italian tenor style. The scheming brother, Enrico, is Gabriele Viviani, another fine voice. Raimondo, the kindly tutor is played by Oren Gradus and the hapless husband Arturo is sung by Adler Fellow Andrew Bidlack who, unfortunately, was hopelessly outclassed by his fellow cast members. It’s a small part anyway (he dies shortly after the wedding vows) and just about the only weak link in the entire production, unless you count some peculiar costuming by Christopher Verdosci. Ian Robertson’s chorus sounded great but the soldiers were wearing what looked like bishops’ miters and one guy in a nightshirt and nightcap appeared to be wielding a soup ladle against a supposed enemy. Everybody else looks pretty good in their period costumes and tartans and I’ll grant you that my eyes aren’t what they used to be.

But back to the music, which is what opera is all about when you get right down to it. The well-known sextet at the end of the second act, when Lucia becomes aware of her brother’s duplicity, the brother is briefly overcome by guilt, Edgardo furious at the apparent betrayal of his love and everybody else sympathetic and/or shocked, was immensely moving. Dessay’s duet with a glass harmonica (Donizetti’s original scoring, played here by Alexander Maguerre) was a coloratura marvel. But, despite what you may have heard, “Lucia di Lammermoor” is more than the mad scene. The often-cut brief “Wolf Glen” scene between Lucia’s brother and lover that precedes the mad scene has some of the nicest music in the entire piece and the final scene, which belongs totally to the tenor, is my personal favorite. Filianoti did it proud and, if he was a bit overwrought – as usual – he had the lifeless body of his lady love before him as an excuse. This “Lucia” went to bat before a reported 23,000 people at the ballpark televised opening recently. It hits a home run in the opera house as well.