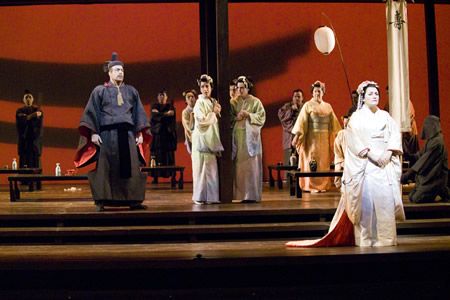 Based on works of John Luther Long and David Belasco

Poor Butterfly. Celebrated for the last century or so in story and song, she never gets to keep her man. And those who watch, from the late-19th Century audiences who wept through David Belasco’s play to the phenomenon of “Miss Saigon” in our own time wouldn’t have it any other way. Composer Giacomo Puccini, who jumped off the Belasco version just as the American showman took his story from an earlier one by John Luther Long, truly made the Japanese geisha, who marries an American sailor only to have him desert her, immortal. No helicopters but some of the most beautiful music ever to float out from an opera stage.

The popularity of this story transcends the fear of “Oh my God, it’s an opera!” and this was visibly manifest in the unusual number of young people in attendance at San Francisco’s opening matinee. This production is the same cash cow created by Ron Daniels for San Francisco in 1997. It played at the Golden Gate Theater that year, just like a Broadway musical, to great success and has been revived almost annually since. Frequent exercise, they tell us, is good for the health and it doesn’t look a bit tired.

Of course, it all depends on the Butterfly and you couldn’t wish for a better one than Patricia Racette. The American soprano is vocally at the top of her game and the role was exquisitely sung. It was a bit of a stretch to accept her as a 15-year-old – rather like Glenn Close trying to play Juliet at this point in her career – but, then again, there aren’t any teenagers who can sing like that. In the second act, when the dewy-eyed bride has become an abandoned wife and mother, Racette seems to have aged appropriately and Cio Cio San’s tragedy gets very real. She eschews the porcelain doll persona and becomes a genuine human being, feisty, petulant and positively defiant in her conviction that her lover will return.

Part of that is in the score and libretto, but much of it can be credited to the singer/actress.

But the big news here is the tenor. There are Pinkertons and there are Pinkertons but Brandon Jovanovich may very well be the best of the bunch. The handsome American tenor has a strong, clear voice and the acting chops to go with it. He definitely is someone to watch. Baritone Steven Powell takes the somewhat thankless role of Sharpless, the sympathetic American consul who spends a great deal of his stage time nagging Pinkerton about his careless, selfish marriage and later telling him “I told you so.” Former Adler Fellow Zheng Cao is nothing short of wonderful as the loyal maid, Suzuki. Donald Runnicles, who seems to be working overtime at the close of his San Francisco tenure (he also conducted The Rake’s Progress this week) kept things humming in the pit and the beautiful orchestral passages never sounded better.

The production itself is user-friendly, streamlined, fast-moving and good looking to a fault. Sliding shoji screens set within wooden frames move back and forth as needed. In the first act, when all is going well, they either are clear or delicately traced with Japanese art. After Pinkerton sails off and Butterfly is reduced to penury, the screens are patched with notices, newspaper and calendars and Suzuki is seen selling off the furniture to keep the little family alive. Lighting, by Stephen Strawbridge, does the rest. When Butterfly’s uncle, a Shinto priest, storms into the wedding scene to denounce her, the sky turns a menacing red behind him. The tableau which accompanies the humming chorus and lovely intermezzo that usually heralds the third act (this production does the whole thing in two) is sheer loveliness, Butterfly in a white kimono standing still, with her child and maid sleeping next to her, keeping watch for her lover’s return, as the sky changes from dusk to dawn with the silhouette of a battleship looming in the rear.

Indeed, the battleship “Abraham Lincoln” does bear Pinkerton back to Nagasaki but it also holds his new American wife and, ultimately the loyal geisha’s doom. As has been said before, poor Butterfly.

(19278)
$20.99 (as of January 22, 2021 - More infoProduct prices and availability are accurate as of the date/time indicated and are subject to change. Any price and availability information displayed on [relevant Amazon Site(s), as applicable] at the time of purchase will apply to the purchase of this product.)

(21702)
$17.39 (as of January 22, 2021 - More infoProduct prices and availability are accurate as of the date/time indicated and are subject to change. Any price and availability information displayed on [relevant Amazon Site(s), as applicable] at the time of purchase will apply to the purchase of this product.)