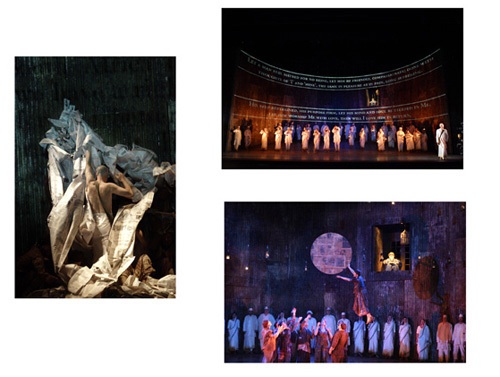 My dear late best friend Danny Cariaga, classical music critic extraordinaire of the Los Angeles Times, once observed that people went to Wagner’s operas when they were new because they had more time. But now, with the onslaught of e-mails, IMs, cells with text messaging, to say nothing of headsets, call waiting, call forwarding, numeric pages and the like, time seems fractured beyond repair.Are we really that far gone? And if so how can we get back to the unalterable truths of life, like love and death? These questions came to mind when I caught The Met’s penultimate performance of Philip Glass’1979 opera Satyagraha on Monday 28th April. One of its subjects is time itself, and Glass’ mature music has always played with our perceptions of it. How long is short, and how short is long? Glass’ exquisite and utterly involving 3-act meditation on Gandhi – its subtitle is “M.K. Gandhi in South Africa ( 1893 – 1914 ) “ – shows how he transformed himself from an ordinary barrister thrown off a train into one of the most seminal spiritual and political figures of the last century whose ideas continue to reverberate. A tall order, for sure, but one that co-director designers Phelim McDermott and Juilan Crouch’s Improbable Theatre made incredibly vivid and tremendously moving.

Glass and his scenarist Constance De Jong, assembled their libretto from the Hindu holy book The Bhagavad-gita ( “Song of the Lord “ ), and the verses they culled from it pinpoint what Satyagraha is really about — self-mastery in the service of spiritual growth. Gandhi developed his non-violent passive resistance movement, satyagraha — it roughly translates as “truth force”, or even “: the force of love” –during his work in South Africa, which Glass’ opera dramatizes in 7 highly allusive and mysterious scenes. The composer cites his absorption in the Khatikali theatre of Kerala , South India, and the extended and abruptly short mosaic-like approaches in Brecht plays like Galileo and ,of course, his with Robert Wilson, Einstein on the Beach ( 1975 ), as inspirations for Satyagraha though a “ Western “ source, or point of reference, is Stravinsky’s from Sophocles via Danielou and Cocteau’s opera-oratorio Oedipus Rex (1926-27 though their aim, like the ancients, was to provoke pity through terror. Glass’ aim is entirely different. His music and its staging strive to educate the audience in the most non-didactic way to what Gandhi and his followers were all about. And he and his collaborators here do this through slowly evolving sonic and visual images which provoke, distance – the Brecht, Lehrstuck and Stravinsky neo-classic tactic – and enthrall.

Much has been made of Glass’ supposedly “simple “ music, as if his “poverty of means” translated into poverty of effect, and affect, but nothing could be further from the truth. Of course he fashions each scene as a series of ground basses or chaconnes, but his imagination is in full flower here, even through this is his first orchestral piece since his Juilliard days ( 1958-1962 ). And it really does show how he’s bent his pit band of 3 flutes, 3 oboes, 3 clarinets, 1 bass clarinet, 2 bassoons, strings 1 and 2, violas, cellos, and double basses, and a Kurzweil synthesizer, to his own deeply expressive ends..

Act 1’s opening scene, The Kuru Field of Justice, unfolded from its 2+3, 2+3, 2+3, 2+2… rhythmic structure, like a steadily opening flower, with Gandhi ( tenor Richard Croft ), in barrister suit and briefcase at the lip of center stage, being set upon – his valise rifled by the supers – as his solo’s joined by that of mythological figures Prince Arjuna, in blue face ( tenor Bradley Garvin ), and in Indian cap and white tunic pants Lord Krishna ( bass Richard Bernstein ), while warring parties, representing the internecine conflict of the Kuru clan, in Victorian and Indian dress, face off, and larger than life papier mache puppets, do battle.

Glass’ music has always trafficked in the down to earth and the mystical, and Satyagraha provides both as 2sides of the same coin. And it’s not for nothing that the third, and concluding scene of Act ii, Protesttextural, harmonic, and yes, melodic variety than all of Satyagraha combined The Met’s forces rose to its challenges as true “athletes of the spirit”, proving that it shares deep yet deeply contrasting familial resemblances to its other siblings in Glass’ portrait trilogy – Einstein, and Akhnaten ( 1983 ). And that his spectacularly moving 2005 opera of John Coetzee’s 1980 Waiting for the Barbarians– which Orange Mountain Music will release this June – continues even more difficult explorations of the human condition. ‘ A man lost in a cruel and stupid dream / But still I keep walking / Walking. “ Improbable’s production differed in many respects from the Bruce Ferden led – he’s sadly dead from AIDS in 1993 – version of the David Poutney /srael1980 Netherlands Opera production which I caught twice – and once with Danny Cariaga – at the SF Opera in 1989. And its immersion in themes of social injustice – will they ever solved – continued in Glass’SF Opera commission, Appomattox, which bowed here last November. What happened – and this went on in the mind, body, and dare we forget it – heart? – can only be sketched here.