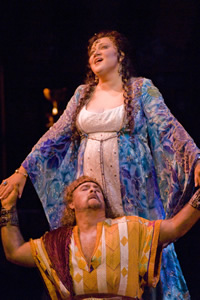 Sung in French with English supertitles.

Samson and Delilah has some strikes against it as far as operas go. Start with a troubling premise. Based on the old-Testament story from the book of Judges, it is the tale of a classic, emasculating female (Delilah seduces, betrays, and cuts off Samson’s hair—thereby robbing him of his super-human power). Of course, the theme holds psychological relevance even today, in an age of burkhas and Bush. Where, however, is the love? Melodrama can hardly exist without at least a glimmer of it, and what Delilah is serving up is the worst kind of romance—fake. As for the music, Camille Saint-Saens, primarily known for his symphonic work, puts out a rather static, pre-Impressionistic tone poem with arias, albeit with some lovely orchestral passages, choral bliss and an orgy.

Unless the sex or the singing is fabulous, then, this opera can drag and be one too.

A lot rides on the performances of the title players, (like the whole second act). San Francisco offered-up Olga Borodina and an up-and-coming tenor Clifton Forbis in a Fall season-opener, the first production supervised by the company’s new general director, David Gockley. At a recent performance, Borodina was in prime sound, but, as someone was heard to remark at intermission, Forbis had no “thrill” in his voice.

Pleasures at the performance came chiefly in the opening act, where, in spite of the silly-looking Israelization of the male chorus members (like the Hassidic Jerome Robbins ballet recently presented by SF Ballet—beards galore) there was some gorgeous choral music, both a prayer, solemn and beseeching, and later, with the arrival of women, the “scent of roses, songs of birds, truth and beauty, promise of love” chorus which introduced the hefty seductress who announces, “I come to celebrate….LOVE”. Bless her full-figured heart, Borodina really did manage to make herself desireable, musically and otherwise. If only the Samson had been more Superman, less Saint-Saens.