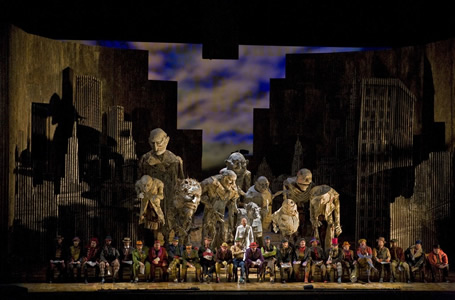 Satyagraha by Philip Glass (music and co-author of the book) and Constance DeJong (vocal text and co-author of the book) is making its Metropolitan Opera debut in six performances ending May 1, 2008. Re-conceived by director Phelim McDermott and associate director/set designer Julian Crouch, this opera about Mohandas Gandhi’s early years in South Africa is a co-production of the Met and English National Opera (ENO), in collaboration with Improbable, McDermott and Crouch’s London-based theater company. Satyagraha, part of Glass’s opera trilogy—Einstein on the Beach (1975), Satyagraha (1980), and Akhnaten (1983-84)—was originally premiered by the Netherlands Opera and, in 1981, initiated the Brooklyn Academy of Music’s Next Wave/New Masters series.

Two directorial choices make this production remarkable. Most obvious is the use of huge puppets, some more than 20 feet tall, that visually connect the ancient Indian story of the Bhagavad Gita to Gandhi’s quest for justice in South Africa for Indians living there. The Skills Ensemble, a group of aerialists, puppeteers, and “performance-makers” add a primal element to the mythic scope set by Glass and DeJong’s vision for Satyagraha. The decision to project limited English translations of the Sanskrit—the language Glass decided would bridge the early Dutch, German, and American productions—onto newspapers held up by the cast or on the curved corrugated metal walls of the set establishes a new approach for handling surtitles and supports Glass’s notion that the text was subordinate to the action.

Telling a linear story was never Glass’s intention. The three-act, seven-scene opera running four hours with two intermissions breaches chronological time as the story moves meditatively from Gandhi getting thrown off a train for trying to assert his right to sit in first class on a valid ticket to the battle of royal families depicted in the Gita where Prince Arjuna is counseled by the blue god Lord Krishna. From there, Gandhi’s path of developing nonviolent tactics to deal with the South African government moves back and forth in time.

Meanwhile, the projected English translation, which was not completely visible from this reviewer’s seat, offered distilled bits of wisdom from the Gita. Those operagoers who did not know Gandhi’s story and probably did not have enough time to absorb the extensive Playbill notes were at a disadvantage. However, this reviewer did not yearn for more surtitle information—the rich current of music under the able baton of Dante Anzolini, the impassioned singing of a fine cast, the processional movement of players across the stage, the surprising set configurations, the colorful costumes by Kevin Pollard, and the awe-inspiring puppets/stilt walkers/aerialists provided a luxurious flow that fed directly into the subconscious mind as if one were dreaming. Even so, one felt in receipt of a sacred text much like the experience of attending a Catholic mass sung in Latin or a Jewish service such as Kol Nidre sung in Hebrew.

Quite surprising was that the puppets did not steal the show. Consider the following scenes. Huge puppets (puppeteers on stilts manage these constructions of either baskets or newspaper, fiberglass kite poles, light cotton cloth and latex glue) representing the royal families in the Gita fight with swords. A whirlwind of newspaper becomes an amorphous, ghostly creature as cast members work together to create this astonishing puppet. An overly long crocodile crawls across the stage until it is broken apart and the audience sees it is made of baskets and brooms. A city of skyscrapers is inhabited by gargantuan gremlins that represent the worst of humanity—politicians and businessmen angry with Gandhi for denouncing their injustices to the world through European newspapers and his own paper the Indian Opinion. Because these puppets were made of ordinary items related to Gandhi’s story and community and because sometimes these puppets were constructed or deconstructed on stage, they never bogarted the limelight nor got in the way of the overall confluence of music, singing/acting, set, and other theatrical touches that were not created by the Skills Ensemble cast members.

Anyone of these puppet shows could remain in memory to the loss of everything else in Satyagraha, but what this writer continues to feel filled with is the music. In a gesture of peace and calm, Glass chose an orchestra without brass and percussion. Because of the constant demand on the wind and string musicians to keep the highly repetitive music flowing, Glass also included an electric organ to “fill out the string parts and double the winds at those moments when, because of the lack of adequate resting places for breathing, their playing might become irregular.” The music in the final act of Satyagraha is what this writer will call a zazen moment, an intense meditation sitting practiced by Zen Buddhists. This writer has the utmost respect for the challenge Glass created for the orchestra in playing this breathless passage that endures for what seems an eternity. And opening night April 11, Richard Croft’s plaintive and hauntingly beautiful tenor voice was particularly poignant in the final act of delivering Gandhi’s case for “truth force” as the Sanskrit word satyagraha means.

Beg, borrow, or steal to see this production of Satyagraha. This is historic and anyone who experiences this ENO/Met production will walk away with a completely new vision of opera.