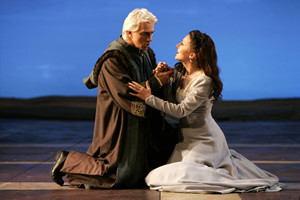 Giuseppe Verdi’s troubled opera, Simon Boccanegra, had a rough start out of the gate when it premiered back in 1857. Apparently the critics offered the dreaded “lukewarm” response. Verdi revised the opera in 1879 and again in 1881, yet still the opera carries the reputation as being difficult. The plot was considered too complicated, the score lacking in memorable arias, and the theme too dark and unresolved to please the usual suspects at the time. After all, it’s about politics spiraling out of control and those caught in the aftermath. Verdi directly addresses the personal vs. the political and his desire for a unified Italy. These are potent messages for these troubled and un-unified times. At the heart of Boccanegra, it’s about forgiveness, probably the most complex of human emotions to fully understand.

No such difficulties troubled Houston Grand Opera (HGO) as they triumphantly launched their 52nd season with a full-bodied version of Boccanegra. With the rising star Russian baritone Dmitri Hvorostovsky in his debut role of Boccanegra, the opera soars with the depth that Verdi intended. I imagine he will have a fine future in this role as it’s a fabulous showcase for his particular set of talents. Besides the obvious “operahunk” factor, Hvorostovsky brings considerable vocal range to this brooding character that is forever trying to do the right thing despite horrific obstacles. His stage presence was perhaps most memorable. With a shock of white hair and shifts between a restless and contemplative mood, he fully embodied Boccanegra’s central dilemma: finding the noble path amidst the worst circumstances.

Michael Yeargan’s bold and linear columns contain this multi-facetted world with a strong visual frame. The players almost looked dwarfed by the set, lending the idea that the problems they face are larger than the individuals. Yeargan’s bold simplicity creates a special vastness that again amplifies the gravity of the scene. Peter J. Hall’s jeweled-toned costumes palate an understated elegance, and Nigel Levings Caravaggio-toned lighting covered Verdi’s masterpiece in a warm glow. Patrick Summers led the impressive HGO orchestra and chorus with amble gusto and gravity to carry Verdi’s dark drama.

In the end, much is left unresolved as the curtain comes down. Audiences are used to neat and tidy Verdi operas; Boccanegra continues to challenge that assumption. So it is, the new HGO season, now under the helm of Anthony Freud, begun on a seriously deep note.