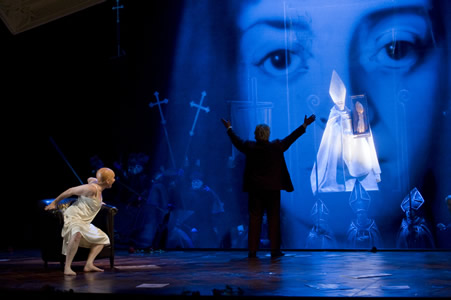 Libretto by Paul Schott (aka Julius and Erich Korngold)

In the dead city there are ghosts enough to populate your dreams. And that is exactly what happens to Paul, the mournful protagonist of Erich Wolfgang Korngold’s “Die Tote Stadt” (The Dead City). It may happen to the audience as well. This is one haunting tale.

Paul has come to Bruges, the dead city of the title which is locked into its medieval past, to mourn his late wife. Locking himself in a room that no one enters except the loyal housekeeper (Katharine Tier), surrounded by old pictures of a lovely young woman with golden hair and other relics of his lost love, he has turned away from life. Until one day he chances to see someone who is a dead ringer for his dead Marie. Same face, same voice, same hair and her name is Marietta, not so far away. He invites her to visit him in his gloomy room and, after she does, he falls asleep. The rest, in a literary tradition that includes Lewis Carroll’s Alice and L. Frank Baum’s Dorothy in Oz, is but a dream.

And what a dream it is. Korngold’s opera, which he and his father adapted from a Belgian novel, reflects the fascination that Vienna – and the world – had with the theories of Sigmund Freud. It’s entirely appropriate for most of the stage action to take place in Paul’s head because that is what it’s all about. And we are right in there with him. The music, lush, lyrical, romantic and redolent of Bruckner, Mahler and Richard Strauss, is perfect for this tale of psychological damnation and redemption.

Korngold’s own story could be made into opera. Born in fin de siecle Vienna, when that city was at the height of its legendary glory, he was a prodigy, proclaimed “a genius” at the age of 10 by none other than Gustav Mahler and inviting comparisons to Mozart. It didn’t hurt that Papa Julius was the foremost music critic in that city of music and young Erich’s talent was carefully nurtured. He composed “Die Tote Stadt” when he was only 23. And then it all changed. Lured to Hollywood by the famed director Max Reinhardt, he worked on film scores, becoming famous for his music for the Errol Flynn swashbucklers “Captain Blood” and “Robin Hood.” His heart was in Vienna but, in the mid-1930s, that was no place for a nice Jewish boy. He stayed on this side of the Atlantic, becoming one of the memorable movie composers and putting his stamp on the sound track of the films of Hollywood’s Golden Age. But this was not what he wanted to do. Returning to Vienna after the war, he tried to re-establish himself in the serious music community but was scorned. He died, a disappointed man, in 1957 at the age of 60, leaving behind his film scores, a symphony, a concerto and several operas, of which this one is considered to be the best.

There has been a resurgence of interest in Korngold in recent days and, once again, San Francisco general director David Gockley is to be congratulated for putting this opera on in a version originally produced by the Vienna State Opera and the Salzburg Festival in 2004. Sumptuously designed for maximum surreal effect by Wolfgang Gussman, it is a pleasure to look at as well as to hear. Torsten Kerl, a Wagnerian heldentenor, takes on the demanding role of the distraught hero. American soprano Emily Magee is a wonderful Marietta/Marie, alternately wistful, seductive, playful and ghostly, as the occasion demands. Lucas Meachem is Paul’s friend Frank, who begins the action by visiting him and trying to convince him to leave his gloomy room for the real world.

You know Paul has begun to dream when the ceiling tilts and Frank rides back in sitting on the roof of a house. You know Paul has begun to dream when a sextet of commedia dell’arte players, all dressed in white, begin to taunt him and fawn over the lovely, sexy Marietta. You know Paul is dreaming when he takes his treasured skein of his dead wife’s hair and locks it fatally around Marietta’s throat. When he awakes he will be different. Perhaps you will be too for having participated in his nightmare. “Die Tote Stadt” may be nothing but a bad dream but it’s one whopper of an opera.