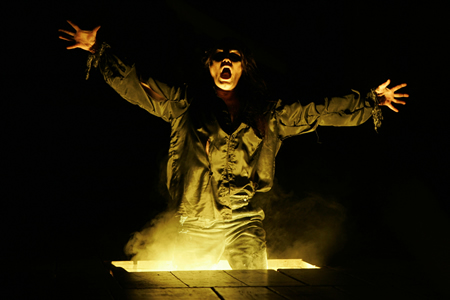 Is it interesting that what some consider the world most perfect opera, Mozart’s Don Giovanni, is about a consciousless cad? Mozart’s retelling of the Don Juan legend is a study in contrasts, light vs. dark and pure vs. evil. The title character lives large, trampling every female he can find, knowing full well his fate is sealed. He seems to welcome his descent, as if it’s a fair price to pay for a immoral life.

Houston Grand Opera’s (HGO) new production of Don Giovanni staring Polish baritone Mariusz Kwiecien elevates the tales of the world’s most notorious lout to new heights. Mozart’s masterpiece straddles the edge between comedy and tragedy while HGO’s production notably ramps up the humor. Still some divine music sends our creepy womanizer to hell, but there’s a mountain of delight on the way.

Ramping up the comedic aspects of the opera, we almost forget that the central character is taking the A-train to Hell, which by the way is located in the basement under the kitchen. Kwiecien turns in an athletic and robust performance as Don Giovanni. (At 33, he had to get an early start to conquer those 1,003 women in Spain.) He’s simply ravishing on all fronts, vocally, dramatically, and in his stage presence. His running skid under the curtain sealed his virility. (Did I mention he spent the first act shirtless?)

Ann Maria Martinez commanded attention as the deserted bride, Donna Elvira. Her authoritative quality makes a noble presence and her comic timing gained momentum throughout. Oren Gradus as Leporella, the servant with an attitude, pushed the hilarity even further and was thoroughly exciting in his early aria listing off Don Giovanni’s outrageous number of conquests. Alexandra Deshorties (Donna Anna) lent a serious and foreboding tone to this otherwise lighthearted evening. Fiona Murphy delivered a gentle and understated performance as the Don Giovanni’s peasant conquest, Zerlina, and Ryan Mckinny charmed as the gullible Masetto.

Carl Friedrich Oberle’s set design is boldly bare, leaving the drama ample room to take center stage. A flexible earth-toned enclosure transforms from palace to village courtyard with a kind of uncluttered elegance, while a descending panel serves to isolate the action. Oberle’s costume choices were spot-on as well with Donna Elvira in crimson red, Zerlina and Masetto clad in classic villagewear and the foreboding Donna Anna in basic mourning black.

Solid performances were the norm, but it was the superb chemistry of the collective that carried the opera. As always, Conductor Patrick Summers and the HGO Symphony Orchestra added their own degree of perfection to this beloved opera.

There’s a funny moment at the end when the houselights come up, with the audience looking about as if there’s been some mistake. Then the principals warn us with shaking fingers in Mozart’s rousing sextet “This is how evil people end.” Hell has never been so amusing.