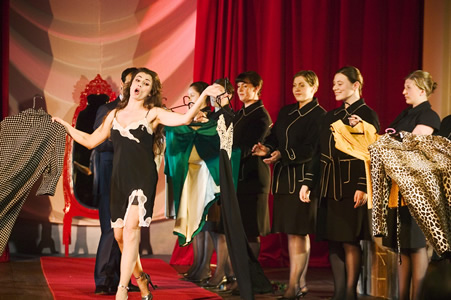 Opera Buffa is the Opera’s equivalent of the cinematic romantic comedy: a form that is not without reach, but which does not require any great distinction to be successful. Historically, the “buffa” style emerged from the detritus of the Opera Seria, which stripped Opera of its comic asides, or, more correctly, precisely made them ‘asides’ from the main business of the composition, which was musical high drama. Buffa came about in the eighteenth century when several Italian composers, Gaetano Donizetti included, took the comic interludes of their highminded brothers and made them into a whole and entire entertainment in themselves. With some not-incidental links to the even more ancient tradition of Italian commedia dell’arte, Opera Buffa featured a set of more or less stock characters playing out of familiar set of comic and romantic entanglements, and this appealed enormously to audiences throughout Europe. So, yes, very much like the sitcoms and romcoms of the big and small screens.

Gaetano Donizetti was one of the foremost composers of Opera Buffa. The word ‘foremost’ requires qualification though, bearing in mind that though popular, this form of composition was not respected in high culture circles. Donizetti enjoyed considerable success in his lifetime, but was repeatedly sidelined in important appointments and commissions in Italy, and so divided his time between France and Austria. He was immensely prolific. He composed more than seventy Operas (along with various other musical works), and, allegedly, when told Rossini had composed The Barber of Seville in two weeks, he remarked that he was not surprised by how slow he was: “he has always been lazy,” he said.

Don Pasquale is generally recognised as Donizetti’s masterpiece, and one of the few works of Opera Buffa deemed worthy of appreciation from the lofty heights of Grand Opera. The story is rudimentary and follows the Buffa form of mixing broad buffoonery with romance. The buffoon, in this case, is Don Pasquale himself, aged, wealthy, curmudgeonly. Dissatisfied with his nephew Ernesto’s courtship of a penniless young widow, Norina, he sets out to find himself a young bride and quickly produce an heir to disinherit the young man. The Don’s doctor, also a friend of Ernesto’s, intervenes. He hatches a scheme to teach the Don a lesson by pretending the strong-willed Norina is his own convent-educated sister and offering her hand in marriage to the Don. The Don eagerly agrees to a pure young bride, but finds himself raked over the coals as Norina treats him to a broadside of female independence in the form of reckless spending and suspected infidelity. In the end the conspiracy is unmasked, fingers and wagged, and the moral of the story is spelled out in song that old men shouldn’t marry young women, or try to intervene in the path of true love.

By definition, there is no great depth to the proceedings, but Donizetti brings great subtlety to the interplay of plot and character through the music. He composes wonderfully interweaved duets, trios and quartets (plus some chorus numbers) that enrich and energise the characterisation, giving it dimension if not necessarily depth The music is clever, but also has a lightness of touch that calls to mind Verdi, Rossini and other of Donizetti’s contemporaries, but it also reveals a level of mature skill that few would have applied to material as slight as this.

Opera Ireland’s production hones in on the energy of the composition, and makes a virtue of its change in venue from the Gaiety theatre to the RDS Concert Hall. The Concert Hall is not a natural opera venue and the layout will be very unfamiliar to regular patrons. It is not an ideal venue, particularly because of its extremely deep stage (best suited to an orchestra) which disadvantages singers standing or walking at its rear. Director Dieter Kaegi has gamely addressed this and other issues arising from the temporary move, and presented a stripped-down but quite intricately staged piece that has his cast move around and on and off that stage, even into the crowd at several points (where they are actually best heard).

There is definitely a reduced budget feel. There are no elaborate sets, none of the expensive trappings expected of Opera production. Apart from the lighting design, which seems clumsy, the gambit of playing fast and loose with expectation seems to have paid off. Instead of the standard ‘classy’ Opera, we have something a little edgier (though arguably slightly desperate) here, and it actually suits the material. One truly remarkable scene takes place with Don Pasquale (Belgian Baritone Marcel Vanaud) and Doctor Malatesta (American Baritone Enrico Marrucci) literally walking in circles and figure-eights around two folding deck chairs as they perform one of Donizetti’s intriguing duets. The intricacy of the interweaving harmonies and the surprisingly neat circumnavigation of the two chairs works really very well, and any perceived necessity for appropriate scenery fades away in the face of the stagecraft basics of movement and song.

This aesthetic pervades throughout the production, which also boasts a very strong performance from Italian Soprano Silvia Colombini as Norina. Colombini is absolutely marvelous, centering the comedy and romance with her spirited physical reading of the defiant would-be trophy wife, milking every high-glam moment of vengeful consumerist excess with confidence and wit expressed through body movement, deportment, and facial expression. Her voice is equally alive with energy and variation (vocal gymnastics are also a feature of Opera Buffa), and plays beautifully with Vanaud and also American Tenor Jud Perry in the role of Ernesto.

(9688)
$6.94 (as of January 25, 2021 - More infoProduct prices and availability are accurate as of the date/time indicated and are subject to change. Any price and availability information displayed on [relevant Amazon Site(s), as applicable] at the time of purchase will apply to the purchase of this product.)

(9730)
$2.84 (as of January 25, 2021 - More infoProduct prices and availability are accurate as of the date/time indicated and are subject to change. Any price and availability information displayed on [relevant Amazon Site(s), as applicable] at the time of purchase will apply to the purchase of this product.)

(27582)
$0.59 (as of January 25, 2021 - More infoProduct prices and availability are accurate as of the date/time indicated and are subject to change. Any price and availability information displayed on [relevant Amazon Site(s), as applicable] at the time of purchase will apply to the purchase of this product.)
related posts