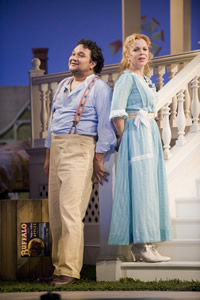 San Francisco Opera’s new production of “The Elixir of Love” is as sweet and refreshing as the ice cream that the hapless, lovesick hero Nemerino peddles from the back of his truck. Set in the Napa Valley in the very beginning of the last century, it celebrates wine, women and song (not necessarily in that order) and, while remaining true to its bel canto roots, is a far cry from your ordinary heavy duty night at the opera.

The story is a simple one. Nemerino, the good-hearted town clod, is madly in love with the worldly, wealthy, educated Adina. She will have none of him, or so she says. Desperate, he buys a bottle of magical “elixir” (really a rather ordinary cabernet) from an itinerant quack, Dr. Dulcimara, who has been working the village harvest festival. And all sorts of wonderful things start to happen – but not for any of the reasons Nemerino imagines. All the girls in town start fawning over him (they have heard he has just come into a huge inheritance) and a jealous Adina starts paying attention. But paying attention to her is a swaggering braggart of a recruiting officer, Sgt. Belcore. The lovers play the rivals against one another until, in the end, they find that the true elixir lies in the loved one’s eyes.

With an excellent cast of singing actors this silly concoction bubbles over with fun. The great Mexican tenor Ramon Vargas heads things up with Inva Mula making a triumphant San Francisco debut as the flirtatious Adina. Like another Donizetti heroine, Norina in “Don Pasquale,” Adina can be a little cruel. She knows the power of her beauty and is determined to use it to the fullest before she succumbs. Mula is sprightly, coy, imperious and, eventually, panic-stricken as she sees her plans begin to go awry. And that voice! She negotiates the difficult coloratura terrain of the score with an uncommon purity of tone. Vargas, no also-ran, grabs us early with his plaintive “Adina credi mi” and seals the deal near the end with the famous “Una furtive lagrima.” If he doesn’t quite have the acting chops of his co-star, it is no detriment. He is playing a bumpkin after all.

Dulcimara, that genial purveyor of nostrums for every ill, is sung by Italian bass-baritone Alessandro Corbelli wearing a fancy purple suit and dispensing promises to match. I have seen Dulcimara arrive onstage in a horse-drawn cart and a hot-air balloon. This time he comes in the sidecar of a motorcycle, driven by his assistant. But the big noise is another Italian baritone, Giorgio Caoduro, also making his San Francisco debut in the role of the pompous, bumptious sergeant. He is handsome, courtly and sings like an angel. No wonder Adina toys with the idea of marrying him. So what if he’s a tad conceited? It’s the voice that counts and Caodura has one to listen up for.

The whole thing plays out on designer Allen Moyer’s small-town set, with a gazebo bandstand right in the middle. But Moyer gets you in the mood before the house lights even go down with a Grandma Moses-type drop curtain, depicting vineyards, farmhouses and rolling hills in candy colors. When the curtain rises you see old men playing bocce ball, long-skirted ladies putting out picnic blankets and little kids selling lemonade. You’re either in the Napa valley circa 1913 or on a set for “The Most Happy Fella.” It’s great.

In addition to the solo highlights mentioned earlier, this production seemed to excel in the ensembles. The duets between Nemorino and Belcore and Adina and Dulcimara are a delight. The chorus of townspeople and farmers does its usual great job but, with conductor Bruno Campanella in the pit, the orchestra sounded sluggish, almost – but not quite – dragging things down. So, who promised you perfect?

(10797)
$4.79 (as of January 22, 2021 - More infoProduct prices and availability are accurate as of the date/time indicated and are subject to change. Any price and availability information displayed on [relevant Amazon Site(s), as applicable] at the time of purchase will apply to the purchase of this product.)

(4398)
$8.98 (as of January 22, 2021 - More infoProduct prices and availability are accurate as of the date/time indicated and are subject to change. Any price and availability information displayed on [relevant Amazon Site(s), as applicable] at the time of purchase will apply to the purchase of this product.)

(8989)
$13.99 (as of January 22, 2021 - More infoProduct prices and availability are accurate as of the date/time indicated and are subject to change. Any price and availability information displayed on [relevant Amazon Site(s), as applicable] at the time of purchase will apply to the purchase of this product.)
related posts