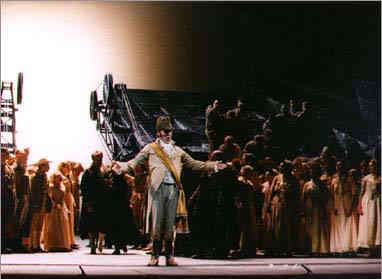 If Fidelio is not the finest argument that opera transcends the sum of its parts, what is? The story has a ridiculous premise: a woman, whose husband has been unjustly kidnapped by a prison commandant, disguises herself as a boy and takes a job assisting the jailer. Despite her shape and penetrating soprano, she fools everybody. The jailer even picks her for a son-in-law &#150; on the very day the wicked commandant wants them to murder the secret prisoner being held incommunicado.

Mozart is often admired for the way he uses vocal means to suggest class differences in his operas, contrasting an Italianate technical proficiency of aristocrats and demigods with simple danceable tunes for barbers and birdcatchers. In Fidelio, Beethoven, who is seldom praised for his dramatic skill at all, goes a step further in the same line. In the foreground of the story are &#147;archetypal&#148; characters: Florestan, the indomitable prisoner; Leonore (disguised as &#147;Fidelio&#148;), who dares all for love; and Don Pizarro, the oppressor. They are set among mere human beings, whose music reflects their ordinariness: Rocco, the jailer who sings of thrift to young lovers; his daughter, Marzelline, who ignores the grim prison to dream of romance; Jacquino, the guard in pursuit of Marzelline (who prefers pretty Fidelio). The ordinariness of the story in the foreground &#150; boy loves girl who loves someone else &#150; is in stark contrast with its grim prison setting. We almost forget what the opera is really about, lulled by the landler rhythm of Rocco&#146;s song or Marzelline&#146;s bourgeois hopes.

Then Pizarro enters, determined to kill his secret prisoner &#150; and, abruptly, we are in the realm of the demonic. A rage out of all proportion to the situation boils through the aria, as if Pizarro&#146;s human form concealed Satanic malice. He tries to bribe greedy Rocco to commit the deed, but Rocco can&#146;t be pushed quite so far. The hesitations in his vocal line tell us something about Rocco that he, perhaps, does not know: his soul is still his own. He agrees merely to dig the prisoner&#146;s grave, comforting himself with the white lie that the hopeless fellow will be better off out of his misery.

Beethoven provides two glorious responses to Pizarro&#146;s demonic evil: first, Leonore-Fidelio&#146;s aria, &#147;Abscheulicher! Wo eilst du hin?&#148;, in which she reveals her true self to us in music almost too awkward to bring off with both excitement and beauty. (Beethoven was a clumsy writer for the voice, especially at the top of the soprano or tenor range &#150; ask anyone who&#146;s sung in the chorus of his Ninth Symphony.) After declaring herself willing to die for conjugal love &#150; a sentiment only a lifelong bachelor like Beethoven could have proclaimed so ecstatically &#150; Leonore opens the gates of the cells to allow the prisoners to walk in the fresh air for a time. They respond with a hymn to freedom in Beethoven&#146;s most elemental sublime. If we are out of sympathy with the soprano after her hectic singing, the chorus states the composer&#146;s case: The story is a matter of humanity vs. tyranny.

In Act II, we find Florestan depicted, by both orchestra and vocal line, in the darkness of despair, though he has a vision of an angelic Leonore coming to rescue him. The two jailers, Rocco and Fidelio, enter to dig the grave, and Pizarro attempts murder &#150; only to be thwarted by Fidelio-Leonore, who reveals herself at last, and by a trumpet call signaling the arrival of the royal Minister. In terms of dramaturgy, there seems little to prevent Pizarro from a quick messy murder or two, even at this late juncture, but the trumpet call has become a character, a voice from another world, and once it sounds, evil is frustrated and Florestan saved. We are operating on levels far beyond realism here.

And what of Rocco, who is still present and has seen his boss revealed at his most monstrous, and his son-in-law turn out to be a woman? When Jacquino says the rescuing Minister has arrived, Rocco cries out that he has come &#147;augenblicklich&#148;, that is, in the nick of time. This is dialogue, not sung, and could be spoken in several ways &#150; but most Roccos emphasize the word, and most Pizarros flinch at it. Rocco has seen the three superhuman figures as they really are. He now commits himself to freedom and heroism, renouncing his complicity with tyranny. In the final scene, it is he who bursts in to tell the Minister of the heroic deed he has witnessed.

Rocco has become Everyman, a representation of us. Like most of us, he has been minding his own business, ignoring the moral implications of existence in the struggle to survive. He has doubtless done many morally a dubious thing to earn a materially better life for his family. But when a real drama explodes into being before his eyes, he refuses to take the final step into villainy, and allows himself to be awakened to appreciation of a greater moral good. He is our best self, ourselves as we wish to be when we face the choice between our conscience and other considerations. If he were not present in the opera, enduring and risking with the impure heart that most of us possess, we would not feel the grandeur of the others to such a degree, even with Beethoven in their corner.

There is really no need to make a staging of Fidelio too topical &#150; Beethoven has already made it universal, and any era familiar with unjust imprisonment responds to it instantly. The Metropolitan Opera&#146;s 1970 Otto Schenk-Boris Aronson production of Fidelio, with its dank prison yard and drawbridge, abruptly filled with light at the ecstatic conclusion, was ideal in its way, but thirty years is a long time for an opera production.

In October, the Met presented a Fidelio by J�rgen Flimm, with sets by Robert Israel, lighting by Duane Schuler, and costumes by Florence von Gerkan. The new staging is vaguely contemporary, the prisoners in white pajamas, the guards in modern uniforms, Pizarro, Rocco and Don Fernando in suits and ties, the women (Marzelline and the chorus in the final scene) in drab flowered dresses that recall the &#146;30s, or perhaps Iron Curtain countries. Karita Mattila, the tall, glamorous, golden-haired prima donna, has cut and dyed her hair and makes a very convincing round-faced adolescent boy. (Will stouter sopranos be able to live up to this?)

The opera is performed as a gesamtkunstwerk; that is, with very few pauses for applause except at the ends of scenes. As there is no need of a long pause to change the set in Act II &#150; the curtain wall of Florestan&#146;s dungeon simply rises to reveal an ethereal cloudscape for the joyous finale &#150; there is no point in playing the Leonore #3 overture at this point, as has been a custom since the time of Wagner and Mahler. Though a highlight, albeit an intrusive one, of Met performances under Karl B�hm and Klaus Tennstedt, it is therefore omitted in the new production.

Flimm&#146;s direction has been as precise as his cast of extraordinary actors deserves. He has given them all recognizable persons to inhabit, and they live up to these figures: Rocco as fussy bureaucrat, Pizarro seething with suppressed hostility, Fidelio as a clumsy but thoughtful boy-chick. Flimm has handled especially well the difficulties of the Dungeon Scene, where Leonore gives Florestan some bread and recognizes him, though he (after two years in the dark) does not know her. Flimm has her raise a trap door between them, and there is a moment when Florestan grasps it in despair and Leonore, on the other side, visibly longs to console that hand by a touch or a kiss, and dares not do so, that is as eloquent, as wrenching, as any moment in the score.

Some of Flimm&#146;s other choices are not so deft. The freeing of the prisoners is clumsy, the gloom of the dungeon (on which Florestan comments at length) has far too many bright lights, and the martial arts skill with which Leonore and Florestan disarm the tyrant is so skillful that we wonder why they were ever afraid of him. Perhaps that is Flimm&#146;s point, but it is not Beethoven: if Pizarro is not truly a threat, those who defy him are less heroic.

The final scene, a static paean to victory, is a challenge to any director (Schenk brought it off, though). Flimm, whose blue backdrop has really made all the necessary points, clearly does not know when to stop: Marzelline (rejoicing with the rest, according to the words and the music) turns into Ophelia, going mad and strewing flowers. Pizarro&#146;s equestrian statue is toppled, and he is strung up on the carcass. Leonore cuts Florestan&#146;s bonds with a knife instead of unlocking his chains. We seem to see not just liberation here but the birth of a new and unstoppable reign of bloodthirst.

The singing was almost as good as it promised to be on paper. Mattila is abandoning such lyric roles as Fiordiligi and Donna Elvira, which is a shame, but as her Elsa in Lohengrin demonstrated two years ago, she is maturing into a major light dramatic soprano. (There are rumors of Salome in the offing. When did you last want to see a Salome&#146;s body?) Her acting is superb, but the voice seemed a bit covered, not quite certain during the quartet and the aria of Act I. She has always been admirably cautious in choosing roles, and one hopes that the awkwardness of Beethoven&#146;s vocal lines, which did not throw her but certainly bucked like a horse half-tamed, will do no lasting damage to the finest young dramatic soprano now before the public.

Ben Heppner gave a most affecting performance, but his voice is associated with more lyric sounds than this music tore out of him &#150; at times he sounded a little like Jon Vickers in this role, which argues that Vickers only began to sound that way when Beethoven began to shred him. Rene Pape had fun acting the fussy clerk, but his lovely bass blended with particular beauty in all the little moments where he sang with Mattila. It was a performance to see, but the musical rewards often took one to another place entirely.

Falk Struckmann gave a spectacular acted performance of Pizarro, but his singing sounded a discordant note &#150; indeed, nothing but discordant notes, harsh, hollow and toneless. It is difficult to conceive of a singer giving Pizarro the satanic authority the role calls for, but singing it in tune would help. Jennifer Welch-Babidge sang Marzelline with a fruity Germanic vibrato that was most pleasing in this music &#150; perhaps a little breathless in her aria, where Maestro Levine seemed to be rushing her &#150; and Matthew Polenzani was the able Jaquino.

That tendency to rush, to keep the performance in under three hours, was the only objection to Levine&#146;s conducting, which often reminded us of the Mozartean content of the little asides of the domestic drama in Act I, and hit the anguish nail precisely on the head in the devastating opening of Act II. The chorus was not overwhelming, did not sound needy in Act I, or sufficiently together at the finale, but this may be new production jitters. This Fidelio should be with us for a long time, and they&#146;ll become more precise.