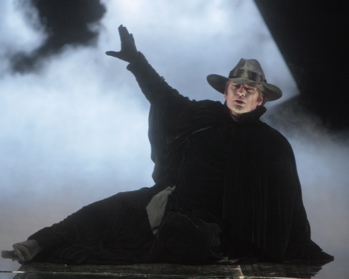 What happens when “The Flying Dutchman” does not soar? The pun is irresistible, but the production currently at the Dorothy Chandler does fall short. The Dutchman from the myth is cursed to wander the seas forever on his ghost ship, only coming to shore once every seven years in search of redemptive love. Opening night, the LA Opera was cursed by the soprano lead, Elisabete Matos, being declared too ill to go on a mere 12 minutes before the curtain went up. Understudy Julie Makerov valiantly stepped in to fill the role of Senta. But the weakness in this production cannot be laid at her feet.

Approximately 10 years ago, LA Opera staged a stunning, but difficult, production of “Dutchman” by Julie Taymor. It, too, was fraught with curses; it had a set that terrified the performers and multiple layers of visual imagery that ruffled Wagner aficionados’ feathers, but no one could accuse it of being wooden. The current production from the Lyric Opera of Chicago is static and confused. A still photo of storm tossed water is projected against a scrim for what seems like forever. Singers are costumed in a strange hybrid of futuristic and anachronistic robes and the choreography is wooden. Whereas Taymor’s set heaved and threatened singers with losing their footing, Raimund Bauer’s set conveys the immobile image of a ship’s ribbed hull in dry dock.

Wagner’s first use of a leitmotif was for the character of the Dutchman himself. It is an unmistakable and powerful theme that has been often borrowed for movies and animations. This production has a “light motif” of its own: an illuminated projection against the rear of the set of an image that is a combination of a propeller and the universal warning symbol for radioactivity … at least that is what I think it was. Wagner did a fine job of warning the audience musically; the projection adds nothing. Nor is the light projection the only confusing symbolism. The women’s chorus of Act II is costumed in what looks like black horsehair petticoats ringed with Mylar hula-hoops of graduated sizes. My hypothesis for this getup is that it is a combination of abstracted spinning wheels – the women are supposed to be spinning cotton – and, when they are tightly grouped, a lighthouse mirror, as all await the return of the local men from the sea. As you can infer, I tried to focus on something other than the gaping open square in the center of the stage that threatened to swallow an inattentive cast member.

Conductor James Conlon generally has an amazing way of lifting singers with his orchestra, rarely competing with them as music soars. It was more problematic opening night. Though Tomas Tomasson (The Dutchman) gained strength in final scenes, he was often overwhelmed in act I. Corey Bix (Erik, the hunter who thinks Senta loves him and will marry him) was overwhelmed throughout. His weak tenor put the callow in callow youth. Given that understudy Julia Makerov had never rehearsed the role with this company and had so little time to prepare she should be forgiven for any lapses and in the love duet she and Tomasson vocally came together quite beautifully. The more consistent and exciting performances came from James Creswell (Daland) and Ronnita Nicole Miller (Mary). Hopefully, one day, Los Angeles will get to hear Ms. Miller’s lusty voice in a role as other than a maid or nursemaid.

Wagner wrote the two-hour, 20-minute “Dutchman” to be performed without an intermission and that is how it is being performed by the LA Opera. Musically, it is an excellent decision, though operagoers should take heed of the warning signs. Wagner is not the easiest of composers, and “Dutchman” is not the easiest of his operas. Unfortunately this production founders under its own weight.