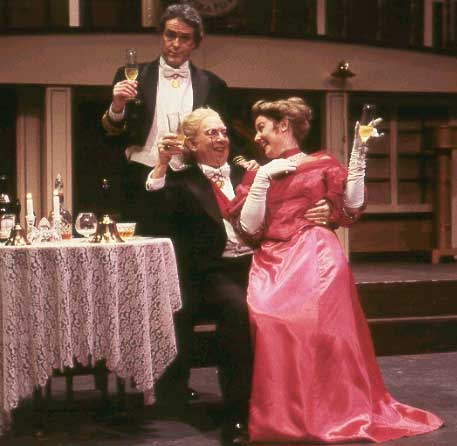 Neither man’s separate compositions ever had the success, fame, or impact of the fourteen comic operettas they wrote together. These works revolutionized musical theater, paving the way for Victor Herbert, George M. Cohan, and Cole Porter.Their biting satire also laid the ground for the social criticism of serious dramatists like George Bernard Shaw.

The collaboration got off to a rocky start.Thespis; or, The Gods Grown Old (1871) went nowhere.The short opera Trial by Jury (1875), and the team’s second full-length effort, The Sorceror (1877), had modest success.

Seeking material for their fourth collaboration, Gilbert turned to one of his Bab Ballads, "Captain Reece," about a commander so devoted to his crew that he provides them every comfort–including marriage to his numerous female relatives.The compliant Captain Reece became the status-seeking Captain Corcoran, commander ofthe H.M.S. Pinafore. The combination made Gilbert and Sullivan international celebrities.Soon after the 1878 London premiere of H.M.S. Pinafore; or, The Lass that Loved a Sailor, New York had eight competing productions running simultaneously.There were church-choir productions, all-black productions, even an all-children’s production.

Gilbert also contributed a simple and absurd plot: two men of different social classes, switched in infancy, now serve on the same ship.One, its captain, hopes to wed his daughter to a Cabinet minister.The other, a common sailor, has captured her heart.

Pinafore‘s romantic ballads are mostly forgettable.But Gilbert’s witty book and lyrics neatly skewer Victorian class distinctions, overblown British nationalism, petty personal ambition, and the British military. The operetta’s humor appeals to a wide range of tastes.Opportunities for slapstickmingle with some very sophisticated satire–as when the captain warns his daughter that her ill-bred sailor "would commit solecisms that society would never pardon."

Gilbert found his fattest target in the Honorable William Henry Smith, M.P. (1825-91).A onetime newsboy and bookseller, with scant nautical experience, W.H. Smith made a fortune, entered politics, and eventually got appointed First Lord of the Admiralty.In Gilbert’s hands Smith became the Rt. Hon. Sir Joseph Porter, K.C.B., "Ruler of the Queen’s Navee," a pompous buffoon who travels from ship to ship with a retinue of female relatives.Singularly unequipped for his position, Porter confesses (in song) that "when the breezes blow,/I generally go below" to hide in a cabin ("I Am the Monarch of the Sea").

More delicious yet is Sir Joseph’s musical chronicle of his rise to power, from office boy to law partner to legislator who "always voted at my party’s call," "never thought of thinking for myself at all," and earned the reward of leading Her Majesty’s Navy ("When I Was A Lad"). Anyone finding this satire dated need only examine the credentials of many of our American ambassadors.

To be sure, some of Gilbert’s references perhaps had more meaning to his original audiences than to listeners today.One now needs a glossary to understand such terms as "jacky" (rum-soaked tobacco), "soft tommy" (a type of bread), and "selvagee" (a sling of rope yarn). And Gilbert stuffed one song ("Things are Seldom What They Seem") with allusions to several Aesop’s fables, allusions mostly lost on 21st-century audiences.

Still, in the hands of a talented company, the operetta retains immense appeal. The New York Gilbert and Sullivan Players (NYGASP) production (seen at Wolf Trap), under co-directors Albert Bergeret and Bill Fabris, sparkles. NYGASP’s co-founder and artistic director, Bergeret has made his company into America’s leading Gilbert & Sullivan repertory ensemble by respecting Gilbert’s original concepts.Not for him the cheeky revisions of Joe Papp and Wilford Leach, who piqued the purists with their 1981 Pirates of Penzance.

Within those constraints, Bergeret, Fabris, and a terrific cast brought out all the wit of Gilbert’s libretto, while the fine NYGASP orchestra (under Bergeret’s baton) powered Sullivan’s score to the furthest reaches of the Wolf Trap lawn. Fabris added elaborate, often charming choreography. Clever stage business, some involving Bergeret and the orchestra, kept the laughs coming while illuminating the occasional obscure reference.

About the production, one can complain only that, especially on the choruses and in some of the duets, one often had difficulty understanding the words.Opera companies should include surtitles even for performances in English–especially with such clever lyrics as W.S. Gilbert’s.

History records Arthur Sullivan’s irritation that his reputation rested largely on his comic operettas rather than on what he considered his more serious music.Perhaps it would temper his disappointment if he knew that, over a century later, his music would still accompany productions as lively and enchanting as NYGASP’s H.M.S. Pinafore.W.S. Gilbert no doubt would have approved.