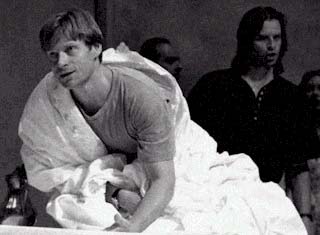 The Keys to French Opera in the Nineteenth Century

A professor at the Paris Conservatory, and for some years its director, the French composer Ambroise Thomas wrote twenty operas between 1837 and 1882. Only two, Mignon and Hamlet, remain, at least occasionally, in the contemporary repertory. Their great success when they premiered in Paris (1866 and 1868, respectively) placed Thomas briefly at the acme of French opera composers, but over time his stature has declined, outshone by his predecessor Berlioz and by his student, Massenet.

As always in the transition from spoken theatre to opera, the libretto by Barbier and Carre (Tales of Hoffman, Gounod’s Faust) takes some liberties with the Shakespeare plot. Rosencrantz and Guildenstern, for example, have vanished entirely from the opera and Polonius is reduced to a mere plotting convenience. More significantly, Hamlet survives and is crowned king at the conclusion. In an 1869 Covent Garden production, just a year after the Paris premiere, the familiar Shakespearean ending was restored, with Hamlet a suicide after taking the King’s life.

The production currently on view at the Royal Opera originated in Geneva in 1996. Both the Hamlet (British baritone Simon Keenlyside) and the Ophelia (French soprano Natalie Dessay) from that production recreate their roles at Covent Garden and they are reason enough to attend. Keenlyside not only makes a dashing and virile young prince, but, more importantly, he possesses a superb, rich baritone instrument that projects effortlessly. Add to that a natural and unaffected stage presence combined with admirable thespian skills and the result is a Hamlet about as good as it gets.

Dessay acquitted herself well, creating a sympathetic and vulnerable victim of love betrayed by circumstance. She handled the difficult coloratura of the mad scene pitch-perfectly, delivering jewel-like tones, if something less that the sense of genuine derangement that would have provided dramatic heft. Lay the blame on stage directors Moshe Leiser and Patrice Caurier who got the poor girl distracted with an overabundance of floral distributions, as if that could substitute for an internalized portrayal of madness. Compounding the problem, they started the revolving-stage scene change even before the music of the aria was complete, stagehands visibly running about, fully destroying what mood had been set.

The production itself is attractive, if somewhat bare-bones. Designer Christian Fenouillat places architectural elements–castle walls and brick columns that have the look of a somewhat impoverished court–on the aforementioned turntables, allowing for rapid and mostly seamless scene changes. Any number of Christophe Forey’s lighting cues seemed to have gone astray, particularly in Hamlet’s major confrontation scene with Gertrude, when Keenlyside had to do some sidestepping so as not to be lost in darkness as he sang. Agostina Cavalca has designed timeless, but modern costuming, simple for the men, elegantly gowned for the women.

There are moments in this production (five acts performed with one intermission) when the drama clicks in and is absorbing. In particular, in the second act finale, after the players have performed their thinly veiled pantomime of Claudius’ murder of his brother the King, Hamlet drapes himself in a tablecloth and spills wine over his head, the red stains spreading over the cloth like so much spilt blood, an effective visual supplement to the passion of the scene. Hamlet’s later confrontation with Gertrude, despite distracting stage business with the portraits, gains great intensity from inspired singing and acting of great conviction from both Keenlyside and mezzo-soprano Yvonne Neff.

Still, the ultimate weakness of Thomas’ score is evident, even in as accomplished an overall performance as this one. The libretto is efficient, but the music, while often melodious and accommodating to the voices, never achieves sufficient emotional depth to render Hamlet a genuinely tragic figure. Covent Garden has reverted to the original ending of the opera, with Hamlet surviving to be crowned the new king, but the triumph seems inappropriate and the surrounding devastation without significant resonance.