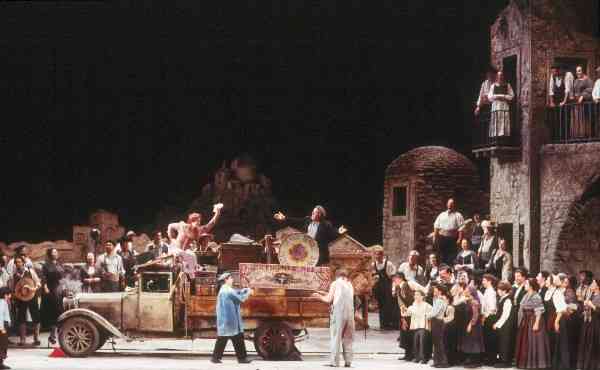 I Pagliacci, variously translated as Traveling Players or Clowns, is a popular and often performed short opera in the verismo style. A tight, well structured libretto uses the play-within-a-play device to explore classic themes of passion, adultery, jealousy, and revenge, all of which is highly suited to operatic expression. The great tenor aria, Vesti la giubba, expresses the anguish of the cuckolded husband who is at the same time a performing clown and must make others laugh, even as his heart is breaking.

The ripe and dramatic vocalizing is not limited to one aria. We have a fine Prologue for baritone, an aria sung by the deformed clown, Tonio, which prepares for the commedia dell’ arte setting while assuring us that we will be witnessing real emotions and "the damage hate can do." And, of course, there is some fine warbling for the soprano, Nedda, and her baritone lover, Silvio.

CV was fortunate to hearI Pagliacci in 1996 at Los Angeles Opera, which, with Washington Opera, jointly commissioned an elaborate production by Franco Zeffirelli. Zeffirelli, never known to function in the mode of understatement, came up here with an over-the-top interpretation, placed in a contemporary urban environment, replete with three story tenements, a wedding, fire eaters, drag queens, children, animals, and enough jugglers and acrobats to staff Barnum and Bailey for a decade. On the stage it worked beautifully, since, in the theater, the viewer can focus on the singers and the action of the story within this broader, very busy, but not inappropriate panorama.

The televised version from Washington Opera is not quite as fortunate due to the poor judgment of the television director in his use of camera and choice of shots. Often, when a broader view of the stage would better allow observation of plot development and character interactions, we are given closeups. A good director for opera on television should be one who loves opera in the theater and, therefore, would understand where the focus should be. This director allowed himself to be distracted from the important central roles of the singers, panning to a roller blader or other Zeffirelli excesses, a condescending approach which assumes that the audience must be held with the novelties, rather than the work being performed. In the theater we can choose what to look at on a busy stage; on television we must rely on the choices of the television director and here he has let us down.

The lead singers (both in Los Angeles and in Washington) acquit themselves well, with Placido Domingo offering a definitive performance of Canio – this in spite of his conflict in interpretation of the role with Zeffirelli, a difference they debate at the end of the television presentation. Veronica Villarroel sings and acts well as Nedda and Manuel Lanza is a convincing and handsome Silvio. CV was less convinced by Gregory Yurisich as Tonio in Washington, preferring the performance of Juan Pons in Los Angeles. Leonard Slatkin conducted in Washington in a slowish tempo which worked for the more lyrical sections, but tended to drag down the movement of the story elsewhere.

We don’t get enough opera on television to refuse the gift of a show like this one. If in some ways it seems like an opportunity for the transcendent missed, it is nonetheless good listening and valuable to have a visual record of Domingo’s mature Canio. Opera lovers might listen to an earlier Domingo Pagliacci, the 1982 Zeffirellii film version with Teresa Stratas as a point of comparison. (That film was televised by Great Performances and some lucky folks may have taped it…) Domingo does not stop growing in his art. He is the finest actor-tenor of our time.