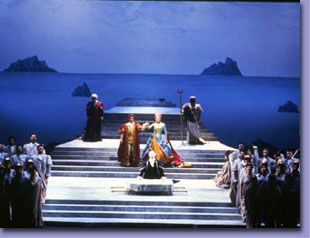 Idomeneo is generally classified as opera seria (as contrasted with opera buffa), a form characterized by heroic emotion and dramatic purpose. Bursting with Mozart’s abundant musical gifts, the work offers arias and ensemble pieces which explore the unhappy conflicts in which the characters find themselves.

First performed in 1781, Idomeneo reflects the operatic conventions of the time. To some extent Mozart stretched those conventions, reaching for a more flowing dramatic line, but, nonetheless, the basic structure of the opera is a rather static series of set pieces. The emotion and drama are ever present in the music and the singing; today’s audiences, with a bit of adjustment to the form, are richly rewarded.

Idomeneo, the king of Crete, returning victorious from war with Troy, encounters a storm that threatens his fleet. In return for safe passage, he vows to Neptune to sacrifice to him the first person that he sees upon arriving ashore. When that person turns out to be his son, Idamante, Idomeneo sends Idamante away, hoping to avoid his pledge to Neptune.

Idamante and a Trojan prisoner, the princess Ilia, are in love. Idamante is also loved by Elettra, herself a princess in exile. Of course, breaking a vow to a god will have repercussions: Neptune sends a monster to ravish Crete. Idamante slays the monster and offers himself as the promised sacrifice to Neptune, as, indeed, does Ilia, but an oracle intervenes and everyone lives happily ever after.

The plot, somewhat hard to buy into for contemporary audiences, is less important in and of itself than as a setup for the conflicts and the emotional positions of each of the principals, providing the platform for musical expression of a variety of powerful feelings. Early on, for example, Ilia, in her first aria, laments the loss of her father and brother in the war, confesses to loving Idamante, and expresses the anguished conflict of loving the conqueror who holds her prisoner and has cost her her family. Elettra, suffering from an ultimate case of unrequited love, asks, "Must the daughter of a king see this prisoner aspire….?" Idomeneo sings of the conflict between his love for his son and his need to protect his son from the consequences of his vow to Neptune.

San Francisco Opera is reviving an old production of Idomeneo this season, and offers a distinguished cast of fine singers in sets and costuming best left in the warehouse. John Conklin’s unit set is a palace courtyard, with a rear wall that opens to reveal the sea, spotted with islands. He then litters the set with, for example, symbols of the defeated Trojans suspended on tackle – a broken column, a piece of cornice, a chariot (?), all in vivid turquoise. He adds a similarly colored chaise on the floor, but one can’t be sure if that was part of the plunder, or Copley’s idea of a Cretan decorator’s nightmare. The costuming follows the 18th century tradition of having the leading ladies wear 18th century gowns, while others are dressed in a variety of togas and robes, some with a Grecian look, most merely unidentifiable as to period and singularly lacking in style.

None of this mattered in the slightest because the singing was inspired and all else seemed unimportant beside the joy of Mozart’s genius, beautifully interpreted. Barbara Bonney, in her first SFO appearance, is a singer of exquisite refinement, her tone, phrasing, and sheer musicality a rare pleasure. Her totally poised presence on stage, with acting and movement gracefully simple and natural, enhanced her musical accomplishment. While her’s is not a big voice, it was deployed with power sufficient for the War Memorial Opera House. An entranced audience hung on every blissful note.

Carol Vaness, an artist who has had her share of ups and downs, was regal and fully on target as Elettra, both capturing the drama of the rejected princess and producing beautiful tone with the biggest voice on stage in this production. Vesselina Kasarova, debuting here in the pants role of Idamante, is yet another talent of the first order, her mezzo-soprano tone beautifully rounded, her phrasing flawless. While veterans Bonney and Vaness both managed well despite the noticeable lack of directorial assistance, Kasarova suffered a disadvantage here, turning out repeated patterns of raised eyebrows, tilted head, furrowed brow, and arms that didn’t quite seem to know where they belonged. G�sta Winbergh as Idomeneo was less even in quality than the other principals, but he pulled through the big moments, particularly his second act aria, "Fuor del mar ho un mar in seno."