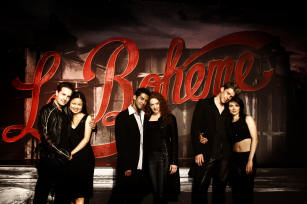 It is hard to believe today that Puccini’s La Bohemereceived a cool response from the Italian critics when it premiered. (You do have to watch out for critics, no?) Boheme caught on quickly with the public, though, and has been in the repertories of the world’s opera companies ever since. A first telecast by the Metropolitan Opera in 1977 was said to have been seen by more people than at all the staged performances since the opera’s premiere in 1896 combined, which confirms the impression that this is one of the most popular operas of all time.

And it is no wonder. With ravishing melodies and directness in its emotional appeal, Boheme is accessible and easy to follow (even without titles), as contrasted with some of the elaborately complicated (and often improbable) plotting of many 19th century operas. It is a story of love, in particular the loves of two contrasting couples. Rudolfo, an impoverished poet, and Mimi, a consumptive who makes her scant living at embroidery, are idealized lovers, tender and caring, their love doomed by the exigencies of life. Marcello, a painter, and Musetta, a coquette, have an on-again-off-again relationship characterized by uncontained jealousies and shrill quarrels.

In the first act, the poverty of the artists in their garret is revealed, as well as their survival tactics, accomplished with humor and brio. In addition to Rudolfo and Marcello, there are their friends: Colline, a philosopher, and Schaunard, a musician. Mimi and Rudolfo meet and fall in love. The second act is the spectacle, placed in the Latin Quarter around the Cafe Momus. It is the same evening, Christmas Eve, and there is high comedy as Musetta baits and takes advantage of her wealthy, older paramour, Alcindoro, and reunites with Marcello. There’s a parade, and a festive street scene that provides lively, colorful background to the unfolding personal dramas.

The third act takes place several weeks later at one of the gates of Paris. Marcello and Musetta have been living in an inn there and Rudolfo is there as well, sleeping off a binge from the night before. Mimi comes to seek Marcello’s advice on the troubled state of her relationship with Rudolfo. Rudolfo is jealous of Mimi’s flirting with others and he’s concerned about her failing health as well. They decide to stay together until the Spring, even as Marcello and Musetta get into another angry fight.

The last act returns to the garret some months later. Both couples have ended their affairs. Musetta arrives, saying that Mimi is on her way there, extremely ill and wanting to spend her final hours with Rudolfo. Mimi arrives and is made comfortable; Musetta gives her earrings to Marcello, quietly telling him to pawn them to pay for a doctor and medicine. Colline sings a farewell to his overcoat, which he goes off to pawn as well. All return, but their efforts are in vain and Mimi dies to Rudolfo’s great anguish.

Regular opera-goers, of course, are not unaccustomed to seeing overweight and over-aged singers playing these roles of romantic youthfulness. It is a convention of opera that disbelief is set aside in favor of the drama as expressed through the singing. When Pavarotti and Caballe sang Rudolfo and Mimi together at the Met years ago, their visual appearance ran counter to the illusion of romance. But it mattered not a whit, because their singing so exquisitely captured the beauty of the music and the emotions of the doomed lovers that listeners were completely entranced and they believed.

Now along comes Australian director Baz Luhrmann, best known for the films Strictly Ballroom and Moulin Rouge, with a Boheme reimagined as a Broadway musical. It must be asked why an opera of such popularity needs to be bowdlerized into a half-breed form–not quite musical, surely no longer opera. The orchestra is hidden under the stage, every singer is miked and all the music is heard through a sophisticated sound system. The result is a certain uniformity of tone, a de-individualizing of the voice itself which is the single most important ingredient for most operagoers. Pianissimo lines cease to exist. The big notes are there, but projection of the voice changes when miked and any inflections, any subtleties of emotion (the earmarks of distinctive opera performances) disappear into the maw of electronics. Luhrmann has succeeded in converting Puccini into Andrew Lloyd Webber.

If evaluated at that level, then not all that Lurhmann has done in this production is negative. He has cast attractive young singers who appear to have the voices and musicianship to carry their roles, though judgement on that must be reserved until they are heard in non-miked performances. Three alternating couples play Rudolfo and Mimi; the performance under review was cast with tenor Alfred Boe and soprano Wei Huang. Both are blessed with the charm of youth and a comfortable stage presence; Huang, particularly, was able to convey Mimi’s vulnerability with some conviction. There was, however, little stage chemistry between them.

Jessica Comeau made a charmingly saucy Musetta, but Eugene Brancoveanu, as Marcello, while displaying a rich and velvety baritone, didn’t climb into character and was awkward and stiff onstage. Daniel Webb was Colline; his big moment, the Coat Song, was sung in one, uninflected tone, never bringing out the emotion of the aria or a hint of the metaphor contained therein.

The production is big, somewhat ponderous, but handsome to look at. Luhrmann has opted to shift the time from the mid-nineteenth century to the mid-20th, which seems a strange decision for an opera that so superbly captures its specific time and place. One presumes the more contemporary setting to be more marketable; fortunately it doesn’t do excessive harm to the work, but neither does it enhance it in any meaningful way.

The second major conceit is to put the drama within a theatrical context. There is no curtain; the audience arrives to a mostly black stage with a large, somewhat amorphous central structure which will unfold into the garret scene when the music begins. Stagehands dressed in black are deliberately visible around the periphery of the action, whether for moving scenery, holding fog and snow machines, or whatever other stage business needs tending as the performance progresses. This rather self-conscious scheme is carried into the titles which appear at varying places onstage, depending on the demands of the particular setting. Varying typefaces are used in a somewhat comic book manner and the phrase "scene change" is projected to cover the dead time while the turntables and elevators are moving elements into place. (This sort of self-referential play is accomplished with more finesse and wit in the unpretentious musical now on Broadway, Urinetown.)

The scenery is executed predominantly in stylish black and grays, with the occasional splash of color highlighted. Lurhmann does seem to emphasize the obvious with a large red neon sign reading "L’amour," as if he didn’t have any confidence in his audience’s ability to get the message from the play itself. The Cafe Momus scene is flashyand appropriately peopled with a crowd from nuns to hookers. It, too, is all blacks and grays, even to the Christmas gift wrappings. But then Musetta’s entrance, draped in bright red, high 1950’s fashion, is all the more effective and great fun.

Perhaps the redeeming virtue of a production like this one is that some in the audience, not previously interested in opera, will be intrigued enough to give the real thing a try.