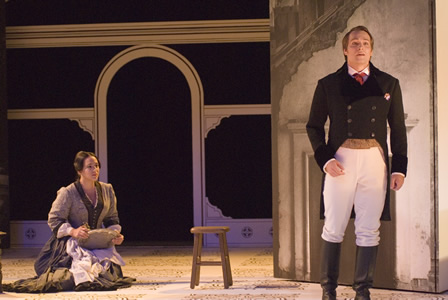 Once upon a time there was a poor unloved girl who sat by the fire and stirred the ashes. And she got to marry the prince! Perrault called her Cinderella; Rossini “La Cenerentola,” (which means the same thing, only in Italian) but the bare bones of the fairy tale and the opera are the same. It is the quintessential rags-to-riches story with a universal appeal to both young and old. With Rossini, however, you get the added benefit of some marvelous music and quite a few comic routines. There are a few changes: the glass slippers are a pair of bracelets, the fairy godmother is a baritone and, instead of a wicked stepmother, you get a boozing, pompous old baron who is down on his luck. But some things stay the same. Cenerentola is lovely, once you scrape the grime away, and far more spirited than her Disney incarnation. The stepsisters – while far from ugly – are mean and conceited and the prince as handsome as can be.

You all know the story so let’s get right to the production. One is tempted to make allowances for the first showcase for this year’s crop of Merola opera students, chosen by audition to participate in the famed San Francisco Opera training institute, now in its 50th year. No allowances necessary. The program which, in the past has turned out such luminaries as Ruth Ann Swenson, Susan Graham, Deborah Voigt, Dolora Zajick, Anna Netrebko, Thomas Hampson and Rolando Villazon, has another promising crop of future superstars on its capable hands. The only thing seriously wrong with “Cenerentola” is that, by the time you read this, it will have come and gone. Too bad because it was worthy of any operatic stage in the country.

What it lacked in opulence was compensated by ingenuity. Erik Flatmo’s bare bones scenic design allowed for huge painted squares to be turned, changing the locale from Don Magnifico’s moldering mansion to a chandeliered ballroom in the palace in a twinkling. And, if you ever doubted the spoiled stepsisters’ characters, a closet opens on the side to reveal a collection of shoes that would do Imelda Marcos proud. Two tall major-domos, balancing trays of apples on their heads are sufficient to indicate a feast and umbrellas snap open during the storm music.

The orchestra, under famed vocal accompanist Martin Katz, also was scaled down (although it probably was the right size in Rossini’s day), yet it grabbed you with the overture and never missed a beat after that. And the singers? Ah, the singers! Argentinean native Daniela Mack was a perfect Cinderella, no small feat since the most challenging of her bel canto gymnastics come in the very last scene. Alek Schrader was a dashing prince, and a rare tenor, in command of both his high and low registers. Coming in a close second – or maybe even neck-and-neck – was Paul La Rosa as Dandini, the prince’s cheeky valet who spends a good deal of the opera impersonating his master. His is the comic role, the Figaro to Rossini’s Count Almaviva, even throwing in a few bars of “Largo al Factotum” from “Barber of Seville” to prove it. Juilliard-trained La Rosa is a fine baritone, good looking and funny to boot.

In the smaller roles, Ani Maldjian and Daveda Karanas were exceptionally bratty stepsisters, while singing beautifully and Sam Handley swaggered appropriately as their pompous papa. If Matthew Moore was a little underwhelming as the “fairy godfather” tutor Alidoro, he may be excused. Rossini wrote it that way and it’s the only boring bit in the show.

If this performance is any barometer, the future of opera is in very good hands.