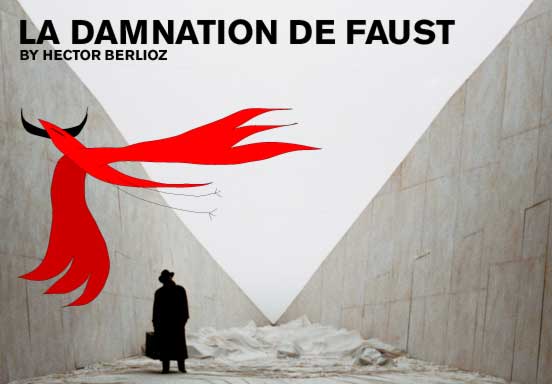 The roots of the Faust story go back to early 16th century Germany where there was a Georg Faust, widely thought at the time to be dabbling in the black arts. Marlowe wrote a play on the Faust theme (in which Georg became Johann), but it’s Goethe’s version (1808) that assumed central literary importance. The theme of man’s hubristic desire to know and experience all, a desire fulfilled only by selling one’s soul to the devil, has such universal resonance that the story is constantly reinterpreted in the literary and performing arts. No less than four operas (Berlioz, Gounod, Busoni, and Boito) have been based on the legend.

Berlioz drew on a translation of the Goethe for his La Damnation de Faust, an 1846 expansion of an earlier work of 1829. Conceived as a concert piece, rather than as an opera, Damnation has been produced only rarely on the opera stage. San Francisco Opera has restaged a bold 1993 production from Munich State Opera in which Thomas Langhoff has created a visually dramatic and theatrically cohesive interpretation of a work that easily could become mired in its somewhat static and episodic structure.

On both sides and below a raised main stage, Langhoff has his chorus seated, dressed formally, representing an opera audience, by extension implicating the public. At first behaving with utmost reserve and propriety, individual members of the chorus subsequently are drawn into the events transpiring on the raised stage. There, there is a simple setting of two high walls that create a passageway (or a room) that recedes away from the audience in deep perspective, suggesting both claustrophobic containment and infinite distance.

For no other reason than he wanted to include the Rakoczi March, Berlioz opens the opera with Faust in Hungary, singing an ode to Spring and of "how sweet to live in the depths of solitude, far from human strife." Peasant dances follow, strangely desultory here, with a determined theme of men dominating women. War breaks out and the soldiers dance with their machine guns, then pound dummies with the stocks of their weapons.

In the second part (of four), Faust is in his study contemplating suicide when he hears an Easter hymn (Christ is Risen), an exquisitely ethereal piece for the chorus. His faith is restored, soon followed by the appearance of Mephistopheles who promises to fulfill all of Faust’s desires. A tavern scene is next, complete with drunken revelers whose song of the merry life is undercut by a tone of cynical desperation, complete with mock cardinals, drag nuns and general bawdiness.

Mephistopheles tells Faust that Margeurite is in prison awaiting execution for killing her mother; in exchange for her release, guilt-ridden Faust signs his contract with the Devil and descends to Hell as Mephistopheles rejoices in his fall. Margeurite rises to Heaven in redemption.

Unfortunately, the success of the evening was severely diluted by the Faust of tenor David Kuebler, who projected poorly much of the time, and created an unpleasant, forced sound when singing full out for the climactic moments. His acting was limited to grimaces alternating with a disconcertingly goggle-eyed expression.

The Marguerite of soprano Angela Denoke, on the other hand, was captivating in every way in this, her first performance of the role. Her voice radiates power, control, and accomplished musicality as she produces a beauty of tone to do full justice to Berlioz’ music. She is a consummate Margeurite. Kristin Sigmundsson’s rich basso and splendid acting made for a Mephistopheles both devilish and amusing.

Conductor Donald Runnicles had his large crew of orchestra, chorus, and principals under firm control, keeping the pace moving along, but unrushed.