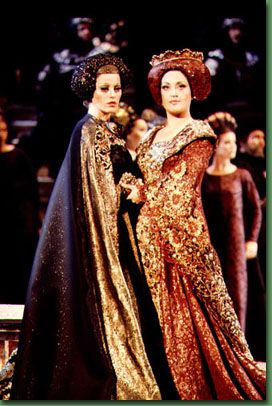 Throughout the San Francisco Opera’s production of La Favorite, there are seven larger-than-life figures of saints mounted high up on floor-to-ceiling poles, looming over the the entire opera’s proceedings. It is a telling design, reminding a contemporary audience of the pervasive dominance of the church in the lives and thoughts of the people of fourteenth century Spain. Long before the Reformation, and at a time when the Inquisition freely wielded its bullying powers, the papacy confidently challenged even the power of kings..

With that as background, the tale of a love triangle that unfolds on the stage becomes more understandable and reverberates with the emotions of characters for whom the church is a constant, internalized moral presence. Fernand, a novice in a monastery, has fallen in love with a woman of the court, and gives up his calling to pursue his passion. Immediately, the power of the institution and the self-determination of the individual are at odds, and the conflict is deeply imbedded within the conscience of our hero. Still, he has as yet committed no mortal sin and there is hope for love fulfilled. Unknown to him, the object of his desire is none other than the mistress of the king, whose adulterous relationship with the king has aroused the wrath of the church.

So La Favorite, the original French version of Donizetti’s 1840 opera, has four leading roles: Fernand, Leonor, mistress to King Alphonse, the King himself – and the church. The church is embodied in the character of Balthazar, abbot of the monastery and Fernand’s mentor. They work out their unhappy destinies in a collection of bel canto arias, duets, and ensemble pieces as glorious as any Donizetti wrote.

That San Francisco Opera is the only company in the world to schedule La Favorite this year seems an oddity for a work so rich in musical pleasures. Perhaps the difficulties of casting result in caution elsewhere, but Lotfi Mansouri has fearlessly assembled a group of principals who bring this material to pulsating life; this is world class musical drama at a level which San Francisco has not often seen in recent seasons. Sonia Ganassi, the mezzo-soprano, powerfully centers the proceedings with a voice ranging from deep and dramatic chest tones to a round, pure top that soars easily over the large ensemble. Her instrument and her fluid musicality combine with convincing acting skills – the arching storyline of her growing awareness of her position as outcast for whom there will be no happy ending will tear at the heart of all but a fourteenth century pope.

Marcello Giordani, as Fernand, sounded inadequately warmed up in the first act, but came through with brilliant singing thereafter and dashing vigor in his characterization. One can’t help but to wonder how a man who becomes a military hero, leading Spanish troops to victory over the Moors, can remain so naive as to Leonor’s position, but that is no fault of Giordani’s and with his ringing high notes, who cares? Vladimir Chernov as Alphonse completes the triangle with singing on a par with his associates and a somewhat understated, deferential regal air that works under the circumstances.

With the saints on high, the surrounding settings were provided by rear projections and minimal additional bits of scenery, all fully serviceable, particularly as backdrop for the lush costuming by Jane Greenwood.

SFO’s La Favorite is the kind of opera experience that keeps subscribers coming back for more. They tolerate the constant stream of squalling tenors in disappointing productions in exchange for moments such as these when the music and the drama come together to provide the deep satisfaction that is unique to great musical theater.