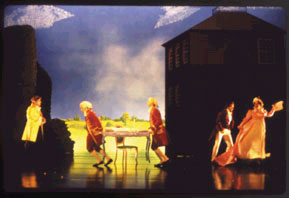 Scholars debate the classification of Mozart’s early opera, La Finta Giardiniera, which contains elements of both opera seria and opera buffa, but less academically oriented Mozart-lovers will find in it a satisfying helping of the composer’s enchanting melodies remarkably attuned to the voices which project both exquisite sounds and the subtleties of a range of emotions.

New York City Opera’s production, which originated from Florida Grand Opera, takes a pronouncedly buffa approach, often reaching for the highly comedic with its distinctly contemporary utilization of the self-referential. In an essentially comic opera whose libretto returns often to words like bafflement, insanity, craziness, paralysis, perplexed, torment, and sorrow, the choice to set this production in a contemporary "spa" (read "sanitarium") makes perfect sense. "People a little crazy come here," report the supertitles, presumably the words of the white-coated (non-singing) psychiatrist who supervises the institution with a benign, non-directive approach as his patients bemoan their variations on lovesickness in one delightful aria after another, as well as a handful ensemble pieces.

These patients, the doctor continues, are "driven mad by love. They, like all lovers, are delusional." Delusional or simply confused, these are lovers blinded by their passion, unable to resist the yearnings of their hearts. With the typical complications of 18th century opera, the story is a veritable roundelay of disguises, deceptions, and even a touch of gender-bending.

The Podesta (mayor) is in love with Sandrina, a gardener, who is really Violante, a marchioness in disguise.She is in love with Count Belfiore who, in turn, has become the lover of Arminda, the Podesta’s niece. Arminda has thrown over Ramiro, a pants role sung by a mezzo-soprano. And, of course, there must be servants: Nardo, a gardener who is love with Serpetta, a chambermaid who is in love with the Podesta. Confusing? Sure, but what a great excuse for comical carryings-on and beautiful singing!

As is its accustomed manner, NYCO has cast a young, attractive group of singers for the seven principal roles. All acquit themselves skillfully, projecting both passion and humor as appropriate–often simultaneously–along with expert delivery of the generously embellished melodies spun out by the precocious 18 year old Mozart. Soprano Lisa Saffer (Sandrina/Violante) leads this all-American cast with a skilled instrument, fine phrasing, and beguilingly youthful good looks. Sandra Eddy (Ramiro) was demonstrably an audience favorite with the pleasing, unforced tone of her high mezzo voice. Brian Anderson (Belfiore) has a light tenor instrument delivered with clarity and a notable facility for expressing comic bafflement while sitting in a bathtub.

Mark Lamos’ direction is admirably imaginative through the first act, picking up every opportunity for amusing stage business attuned both to the music and to the intricacies of the plot. The therapeutic baths and massages which are in process as the second act opens raise expectations for more of the same, but the pacing goes awry (including an inexplicably long, awkward pause–to indicate the end of the second act and the start of the third–that had some members of the audience heading for the exits) and the comic touches become forced. Use of commedia dell’arte costumes in the second act certainly is justified by the characters in play, but its implementation here isn’t sufficiently tied to the content, leaving the parallel without much resonance. The unit set is relatively simple and functional, but the miscued and unattractively out-of-kilter lighting by Robert Wierzel is an unfortunate detraction from the garden of delights in this spa of inspired silliness.

(9694)
$19.99 (as of January 23, 2021 - More infoProduct prices and availability are accurate as of the date/time indicated and are subject to change. Any price and availability information displayed on [relevant Amazon Site(s), as applicable] at the time of purchase will apply to the purchase of this product.)

(16289)
$8.99 (as of January 23, 2021 - More infoProduct prices and availability are accurate as of the date/time indicated and are subject to change. Any price and availability information displayed on [relevant Amazon Site(s), as applicable] at the time of purchase will apply to the purchase of this product.)
related posts