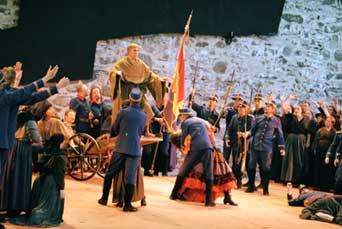 La Forza del Destino announces its intended theme forcefully in its title, but it really doesn’t deliver. The libretto is a mess, a poorly structured story in which unbelievable coincidences, dead characters returning to duel again (in this production, anyway), and single-minded motivations destroy any possibility of suspension of disbelief. The force of destiny remains to be demonstrated elsewhere.

On the other hand, the force of beautiful music, both vocal and orchestral, transcends the awkward plotting and reasonably accounts for the survival of the opera in the repertory. The music is primo Verdi and the story at least provides the setup for some first rate singing infused with the outsized emotions set up by the plot. So, for example, in the first scene, the heroine, Leonora, has a fine aria ("Me pellegrina ed orfana") which expresses her insecurities over her planned elopement and establishes her naivete and vulnerability.

Her lover, Don Alvaro, secretly an Incan prince (don’t ask!), arrives and, of course, there is a rousing love aria. Their flight, though, is interrupted by Leonora’s father and, when Don Alvaro throws down his gun in capitulation, it accidentally fires and kills the father. Everyone flees.

The lovers are inexplicably separated and do not get to meet again until the very last scene, years later. What happens in between is largely the pursuit of revenge by Leonora’s brother, Don Carlo, interspersed with dramatic filler (but great opportunities for characterization and bravura singing) in the form of a gypsy (dire fortune telling, of course) and assorted monks.

Great Performances is offering a telecast of a production by the Kirov Opera, taped at the Mariinsky Theatre in St. Petersburg before a live audience. Verdi wrote Forza for this very theater and revised it for a later production. Here Valery Gergiev, artistic director of the Kirov (and conductor of this performance), reverts to the seldom seen original version of 1862. Yes, it is a darker, rather more pessimistic version, but it doesn’t help matters much – from a dramatic viewpoint, this is still highly exaggerated melodrama and the old-fashioned Kirov production wallows in all its high-blown histrionics. When Don Carlo stomps into the monastery seeking Alvaro, one sword over each shoulder, eyes ablaze, the borderline has been crossed – it is beyond melodrama; it is caricature.

It is only fair to point out that taping an opera directly from its stage production puts the whole affair at a certain disadvantage. The heavy makeup and broad gestures of operatic performance are intended to project to generally large opera houses, at the least across the distance of an orchestra pit, and certainly not to the intruding intimacy of a video camera. It was never meant for an audience to be looking down the throat of a singer in full throttle, as it were, and when that happens in a telecast, it is an unwonted distraction.

All that said, this telecast is still worth a look for some beautiful singing by the principals. As might be expected, subtlety is not in the forefront, but fine voices and ripe emotion combine for some rewarding moments. Gegam Gregorian has a big, ringing tenor voice which he uses to excellent effect; his third act aria ("O tu che in seno agli angeli") is genuinely moving and his later duet with Don Carlo (Nikolai Putilin) is well performed by both. Soprano Galina Gorchakova is also gifted with a big instrument of wide range. She soars on the climactic high notes, producing a sensuously round sound without a trace of harshness. Her prayer at the end of Act II is heartfelt and affecting and her interpretation of the great last act aria, "Pace, Pace, mio Dio," also a prayer, is powerfully dramatic.

Reviewed from Kirov production as telecast by PBS, June, 2000

(as of January 21, 2021 - More infoProduct prices and availability are accurate as of the date/time indicated and are subject to change. Any price and availability information displayed on [relevant Amazon Site(s), as applicable] at the time of purchase will apply to the purchase of this product.)
related posts