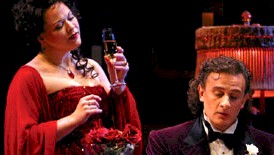 La Rondine is the only opera among Puccini’s mature works that is generally passed over in the current repertory–and with good reason. Written and first performed in the midst of World War I, it’s a work that looks back with somewhat treacly nostalgia, as if the world were frozen somewhere in the nineteenth century.

Placed in fin de siecle Paris, the plot is disconcertingly similar to that of Verdi’s La Traviata which is set two centuries earlier. Magda, a courtesan, falls in love with Ruggero, a handsome young man of good family, parts from her wealthy lover and leaves Paris to live with Ruggero in the south of France. There is no Germont here, the parental force of Traviata who so effectively puts Violetta into profound conflict. When Ruggero proposes to Magda, he has already received the blessing of his mother in a letter which approves of the match so long as his intended is of good character. Magda confesses her past to Ruggero and leaves him. At least Puccini did not feel the necessity of punishing her with a terminal case of tuberculosis.

Originally commissioned by producers of Viennese operetta, the libretto of La Rondine was problematical, running through several writers before Puccini was satisfied. Starting with light Viennese comedy at a party at Magda’s, it ends with the emotionally heavy sacrifice, a pastiche of a work, mixing tone and emotions into a rather amorphous whole. The work is marginally redeemed by the sensuous beauty of Puccini’s orchestrations and occasional moments of compelling vocal music, particularly for the soprano.

New York City Opera’s production uses a unit set for the first two acts, the same framework changing from the grand salon of Act I to the music hall gaiety of Act II with some changes of furniture and the addition of a galaxy of colorful Japanese lanterns. The final act setting is a simple garden scene outside the villa near Nice. Costuming is elegant, with pastel gowns for the ladies in Act I to the brassy oranges that dominate the dance hall.

The most memorable aria of the evening comes early in the first act when the poet, Prunier, sits down at the piano to offer his new song (Chi il bel sogno di Doretta pote indovinar?). Here City Opera makes an inexplicable and horrendous blunder in using an electronically amplified piano which produced an ugly, unnatural sound and disturbingly distracted from tenor Tracey Welborn’s delivery of the aria. When Magda gets her chance to sing it, the piano sound is replaced with the full swell of the orchestra. It is an aria of surpassing beauty expressing longing for the passion of young, romantic love. Pamela Armstrong, possessed of an unusually fine soprano instrument, delivered the aria with superb musicality, unforced and elegantly delivered tone, and, alas, a total absence of passion. Only in the second act did she inject some believable emotion into her singing and by the third act it was impossible not to feel genuine sadness at the end of her romance. That it is mere sadness and not tragedy is not the fault of the singer, but the failure of the libretto to create the dramatic arc that would evoke the more profound response.

One could only feel sympathy for the Ruggero of Gerard Powers, whose sweet but extremely light tenor, even with City Opera’s amplification, is overwhelmed by the other singers, the orchestra, and the sheer size of the auditorium. Angela Turner Wilson as Lisette, Magda’s saucy maid, demonstrated a natural comic flair while Welborn’s Prunier edged into hamminess.

Careening as it does between light comedy and rather soapy melodrama, La Rondine ends up working as neither; it is hard to imagine any production that could transcend the weaknesses of the libretto. Though Puccini’s music offers moments of pleasurable listening, the visceral thrill of grand opera remains decidedly absent.