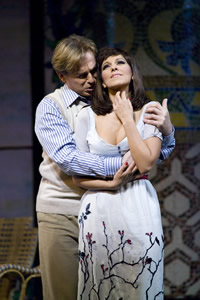 Two lovely ladies are making rare appearances this month on the San Francisco Opera stage. One is the gorgeous Romanian diva Angela Gheorghiu, who has conquered audiences all over the world but never, until now, graced the city by the Bay with her presence. The other is the heroine of the opera whose role she sings. Magda is the lead character in Giacomo Puccini’s least known, rarely performed La Rondine (The Swallow). San Francisco Opera has mounted the work a mere four times in the last 73 years, the most recent dating to 1978. And this one, a Nicholas Joel production with eye-popping Art Deco sets by Ezio Frigerio, is a definite charmer.

Charm is Rondine’s long suit. The plot, a variation on the La Traviata theme of worldly courtesan meets naïve country boy with passionate and disastrous results, is nothing new. The form, however, makes it lighter than Verdi’s masterpiece. La Rondine is more of an operetta than grand opera, with that genre’s comic second set of lovers, set pieces for soloists that are more song than aria, a nightclub scene, a waltz and an overall lightness that buoys it up until a few poignant moments at the end.

Puccini, riding on the success of Tosca, Butterfly and Boheme, became interested in the operetta form, already wildly successful in Vienna, Paris, London and the U.S. (but not in his native Italy) after meeting Erich Wolfgang Korngold and Franz Lehar, leading practitioners of the art. Obtaining a commission from a Viennese impresario, he set out to write one of his own. It bowed in Monte Carlo in 1917 and, although it had the requisite maid who borrows her mistress’ finery for a night on the town (see: Die Fledermaus) and the love of an older woman for a younger man (reference: Der Rosenkavelier), it never really caught on. Nowadays it generally is viewed as a kind of one-hit wonder and the often-performed Doretta’s Lied occurs some 15 minutes into the action, leaving audiences waiting for more through the next two hours.

Too bad because the rest of the music is Puccini-lovely, perhaps too light to be taken seriously by opera lovers and too operatic for those who prefer operetta. A hybrid, but nonetheless enjoyable and worthy of more performance than it gets.

The curtain rises on a stunning Art Deco drawing room, its walls covered with Klimt-like murals. Magda (Gheorghiu) is the kept mistress of Rambaldo (the always-reliable Philip Skinner), a wealthy Parisian. Dressed in a glittery gown, slit to the hip (costumes by Franca Squarciapino), she entertains friends, among them the poet Prunier (Gerard Powers) whose music nudges awake a long-dormant dream of love. Although he protests her lowly station, Prunier himself is in love with Magda’s pert and saucy maid Lisette (a cute but often shrill Anna Christy). Enter a young man, newly arrived from the country (Misha Dudyk) and bearing a letter of introduction to the powerful Rambaldo. Before long, we’re off and running on the high road to romance.

Magda is weary of her meaningless and unfulfilled existence (Traviata again) and, later that night, goes in disguise to a dance hall where she again encounters the country boy who, of course, does not recognize her. They drink, they dance, they kiss (quite a lot, actually) and, before you know it, they have deserted the dance hall – with its decorated pillars and doors and stained glass windows straight out of Charles Rennie MacKintosh – for a bucolic retreat outside of Nice.

Which they can’t afford. When Ruggero, the young lover, writes his folks for cash, he asks permission to bring home a bride. Learning this, Magda determines that she is not worthy to meet his mother, declares that she is soiled merchandise, as it were, and flees back to Paris, presumably to the arms of her former patron, leaving Ruggero with a broken heart. The other pair of lovers, Prunier the poet and Lisette the maid, waft in and out of all of this bearing their own troubles and providing comic relief.

Trite? Derivative? Sure! But guys, this is Puccini. The music, ably conducted by Ion Marin, is beautiful, the stage pictures even more so. Gheorghiu, who is onstage 24-7, had the audience eating out of her hand with her first big number and it never stopped. Dudyk, who sang a masterful Des Grieux opposite the formidable Karita Mattila in last season’s Manon Lescaut, was no match for her until the final renunciation scene, when he rose to the occasion. Much better was Powers as the sophisticated poet. Perhaps they should have traded parts.

Most significant is the fact that Puccini’s Swallow, slight though she may be, has once again flown into the War Memorial Opera House. Let’s hope it won’t be another 30 years before she returns.