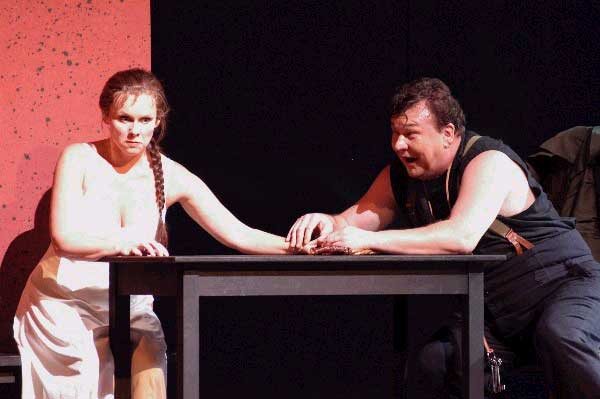 the short story on which the opera is based

Premiered in Leningrad in 1934, Lady Macbeth of Mtsensk achieved considerable initial success, but just two years later (after Stalin attended a performance) it was denounced in Pravda, its heroine faulted as "confused" and "liberal," its music damned as "leftist" and "discordant." Thereafter, it disappeared from the opera stages until after World War II, when there were performances in Venice and Dusseldorf. Shostakovich revised the opera in the 1960’s, apparently trying to assuage the authorities, but it was the 1979 Rostropovich recording of the original score that finally brought this intense and powerfully moving work into the operatic mainstream.

The story is straightforward. Katerina is married to Zinovy, a weak, probably impotent, merchant. Zinovy goes off on a business trip; while he’s away Katerina and a hired hand, Sergei, become lovers. When they are discovered by Boris, Katerina’s father-in-law, he subjects Sergei to a public lashing and locks him in the wine cellar. Katerina kills Boris with poisoned mushrooms and frees Sergei. Zanovy returns, discovers their affair and together Katerina and Sergei murder him. The body is discovered and they are arrested on their wedding day. Sent to Siberia, Sergei takes up with another prisoner, Sonyetka, and humiliates Katerina. Katerina pushes Sonyetka into the freezing, fast flowing waters of the river and then leaps in to her death.

There’s little in this outline that hints at the achievement of the opera. It’s in the accumulation of social detail and the depiction of character that Shostakovich creates a moving drama of tragic proportions. Katerina is an illiterate who has married into the merchant class. Women are powerless and treated as chattel in this pre-Revolution Russia. When Zinovy is leaving on his trip, Boris insists that Katerina publicly kiss her husband’s feet as a pledge of fidelity in his absence, a humiliating ritual. Aksinya, a maid in the household, is harassed by the male workers; San Francisco Opera’s production depicts the scene as a gang rape. And Katerina is both bored and lonely–she has no apparent duties, no children, no education. "The stallion seeks his mare," she sings in a moving aria, "No one comes to me." It’s no wonder she rebels against the authority of her abusive father-in-law.

With the first half full of melancholy, foreboding, and two murders, Shostakovich takes a break into near-farce in a satirical scene with the local police. (He got in digs on the clergy, too, when the local priest was summoned when Boris died.) The police rejoice both in their vodka and in their thorough corruption. Between that and the very character of the heroine, a rebel against authority, it’s not difficult to see why the opera was banned.

The final act, in Siberia, reverts to the melancholy, opening with a magnificent chorus by the prisoners marching to their banishment, followed by a moving, lyrical aria by Katerina in which she sings of a metaphorical lake: "In the wood…there is a lake/Almost round, and very deep./And the water is black./Black like my conscience."

San Francisco has imported its handsome current production, designed by Nina Ritter, from Stuttgart Opera. Visually modernistic, a main set looks at this doomed family’s house from a ground-up perspective, as if seen from a position lying flat on the ground of the courtyard. The surrounding walls thus establish an appropriate sense of entrapment, with the starry sky visible above, distant, unattainable. Individual scenes are drawn with the use of various geometric panels and skilled lighting (David Finn). In the opening scene a large orange panel looms, resting on one point of its rectilinear shape; its weight suggests Katerina’s oppression.

Under the superb baton of Maestro Donald Runnicles, the massed talents of cast, chorus, and orchestra delivered a performance of first quality, uniting the diverse elements, not only of the mixed styles of the music, but of the varied moods of the piece, into a seamlessly integrated musical theater experience. Norwegian soprano Solveg Kringelborn, in the demanding lead role, revealed a powerful, unforced instrument, dramatically convincing in the mercurial leaps of the role from melancholy to rebellious and back. As Sergei, Christopher Ventris made a convincing womanizer and cad, exuding testosterone as well as a pleasingly strong, well-placed tenor.

Special note needs be taken of the stage direction of Johannes Schaaf, whose imaginative bits of stage business, placement, and movement were dramatically expressive and never displayed the physical awkwardness that has become commonplace in opera production.