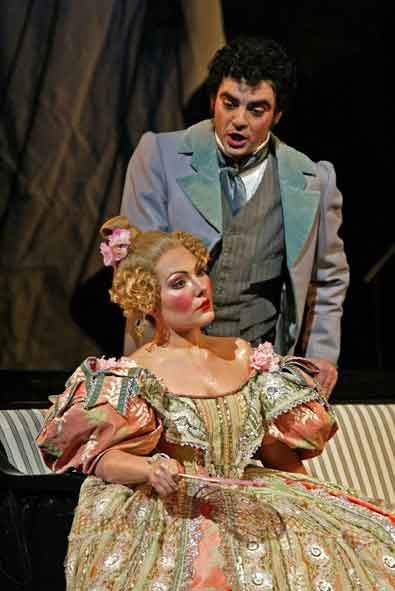 After a number new or imported productions that have, by and large, been indifferently received, the Royal Opera returns to familiar territory. The late John Schlesinger&#146;s 1980 production of Les Contes D&#146;Hoffmann is sumptuously traditional in style &#150; with William Dudley&#146;s elegant sets and Maria Bjornson glamorous costumes &#150; but contains enough moments of wit and mild irreverence to ensure that it never seems staid or tired. Blessed, as here, with generally strong performances it makes for an entertaining, if lengthy, evening.

Les Contes D&#146;Hoffmann was first produced at the Opera-Comique in Paris in 1881. Its composer, Jacques Offenbach, best known for a number of operas bouffes, hoped that it would finally establish his reputation as a serious composer of opera. Unfortunately, he did not live to see the work performed, having died the previous year.Hoffmann, a poet, is passing the evening in a Nuremberg tavern.A performance of Don Giovanni is taking place in the opera house next door and, during the opera&#146;s interval, a group of theatregoers ask Hoffmann to entertain them. He does so with tales of his failed romances with Olympia, Giulietta and Antonia, each relationship apparently thwarted by villainous rivals.At the end of the performance, his new love, Stella, appears to find Hoffmann lying drunk and leaves with his current adversary, Lindorf.

Offenbach&#146;s music is unfailingly tuneful &#150; and richly conducted here by Richard Hickox &#150; with any number of highlights including Olympia&#146;s tour de force coloratura showpiece, the famous Act II barcarolle and septet, and the glorious third act trio when Antonia, literally, sings herself to death.

The evening&#146;s undoubted star is Mexican tenor Rolando Villazon making his house and role debut as Hoffmann.Despite occasional moments of strain, his voice is strong and true and his acting commendably subtle in a role that easily provokes excess.His Hoffmann is young and in love with life more than he is na�ve and foolish; his sudden passions seem credible and his genuine concern for the fragile Antonia suggests a developing maturity that makes his desperation in the Epilogue all the more touching. This is a performance that grows in stature as the evening progresses and should continue to do so as the run proceeds.

The production&#146;s biggest name, Willard White, is in good voice and, remarkably, making his debut in the roles of Hoffmann&#146;s four rivals.He is at his best in the Prologue and Epilogue as a very sinister Lindorf and as a thoroughly evil Dr. Miracle in Act 3.Elsewhere, he is rather stolid and neither sensual nor wicked enough in his second act showpiece, Scintille diamant.There is a nice moment at the end of the third act when he reappears not as Miracle but as Hoffmann&#146;s final nemesis, Lindorf. However, the tension this creates &#150; and connection it establishes between each of Hoffmann&#146;s ill-fated encounters &#150; is dissipated by the lengthy scene change that precedes the brief epilogue.

Among the female roles, Ekaterina Siurina makes an impressive house debut as Olympia.Her coloratura is formidably secure and she is very funny.Jennifer Larmore should be luxury casting as Giulietta but, while she sounds and looks terrific, she is no seductress.In the more substantial role of Antonia, Elena Kelessidi starts a little unsteadily but soon warms up. The voice has its imperfections but is rich and lustrous and her characterization of the role detailed, warm and touching.

There is fine support also from Ruxandra Donose as Hoffmann&#146;s companion, Nicklausse. Witty in performance and ardent of voice she transforms in the Epilogue into a particularly delectable Muse of Poetry whose entreaties might just be enough to encourage the despairing Hoffmann to find salvation through his art. Elsewhere, Andrew Greenan is a fine Crespel and, in particular, Jean-Paul Fouchecourt impresses as four contrasting servants &#150; particularly in his third act cameo as the deaf Frantz when he sings superbly and is tremendously funny without overplaying the pantomime elements of a role that could otherwise bring the plot&#146;s increasingly tragic course to a shuddering halt.

A DVD of the production is available and features a fine performance from Placido Domingo in the title role with Luciana Serra, Agnes Baltsa and Ileana Cortrubas as the women in his life.