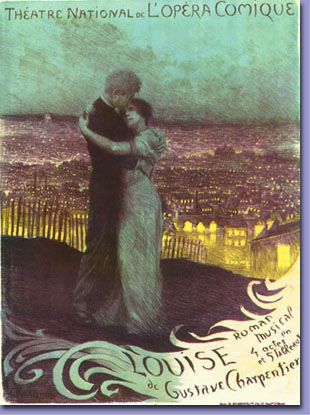 The plot of Louise will tax no one in its level of difficulty. Girl finds boy, girl runs away with boy over (unreasonable) parental objections, girl and boy are deliriously happy, parents fail to get girl to return home to stay, parents are miserable. Finis. No subplots.

Such simplicity in not necessarily a bad thing. Think of Madame Butterfly, which has almost as straightforward a story line. But Butterfly is one of the most popular operas, in constant play by opera houses all over the world. Louise, on the other hand, the only opera by Gustave Charpentier to survive in the repertory, is becoming a rarity onstage, largely perpetuated by French opera houses.

What Louise is really missing is not more plot, or even its absent narrative momentum, but deeper, more rounded character development. Each of the principals is a one dimensional embodiment of a small package of situation and feelings – Louise, the innocent, but adult, woman in love, restrained by possessive parents; Julien, the poor poet and ardent lover; the mean-spirited and rigid mother; and the loving father, selfishly unwilling to let his daughter go. None of them changes a whit during the course of the action and, when the final curtain comes down, you don’t know much more about them than you did at the beginning.

Butterfly sustains emotional involvement because through the accumulated detail of her simple story, an ever deeper understanding of her vulnerability and tragedy evolves. Then, too, Butterfly has a lot of gorgeous music to sing, while poor Louise gets only one great aria, Depuis le jour.

Charpentier’s lyrical paeans to Paris almost make the city a fifth principal here. He is also espousing his political convictions about freedom and self-determination and he throws in a bunch of even less fully drawn minor characters, none of whom serve as more than filler.

In short, it is a far less than satisfying work and, it would seem, is produced these days largely as a vehicle for a great soprano. In that scheme of things, San Francisco Opera could not have done better than its current mounting of Louise for Renee Fleming, whose voice is in its glorious prime, pure of tone, wide of range, and beautifully, musically controlled. Fleming radiates charm and confidence from the stage; she is never awkward and only rarely coy. She knows how to carry herself and is also an accomplished actress, though Louise is hardly the vehicle to demonstrate best her thespian skills.

There are other major plusses in this production. Patrick Summers’ work from the pit grows ever more masterful. Basso Sam Ramey, playing the father, embodies opera professionalism at it best. Particularly as the last act finally develops some musical intensity, at least by comparison to what has come before, it was sheer pleasure to hear Ramey make his music, though his artistry surely is an over-allotment for the quality of the material here. Felicity Palmer, an audience favorite, acquitted herself with aplomb in the relatively thankless role of the mother.

Tenor Jerry Hadley once again disappoints. In his performance as des Grieux in Manon last year, allowances were made as he was said to be ill. No more. Though he had occasional good moments in his performance as Julien, his top seems to have dissolved into out-of-key squawks, there is a pronounced wobble in what little top is left, and his acting is a throwback to the uncontrolled hamminess of another generation. He hasn’t a clue how to move or what to do with his hands. Only Fleming’s powerful brilliance kept her performance afloat with such an unappealing target for her affections.

The new production at SFO, designed by Thierry Bosquet, is a highly traditional one, attractive and serviceable without being particularly eye-opening in any way. The scrim walls of the interior settings, always permitting sight of the Paris skyline, is a welcome and appropriate touch.

Fleming’s ravishing rendering of Depuis le jour is the kind of transcendent opera moment that many opera lovers will keep as a cherished memory. Whether that is sufficient justification for a $4 million mounting of Louise is a value judgment to be made only by the ticket buyers and the donors.