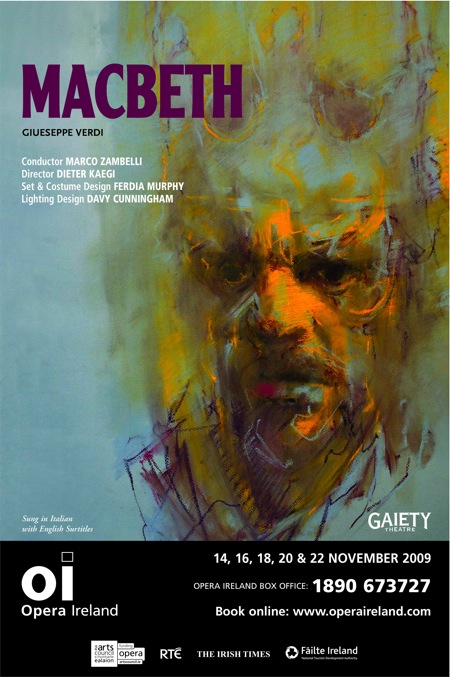 Verdi’s avowed intention with Macbeth was to introduce true dramatic force to his work, previously dominated by historical and religious subjects that provided power largely by inference. Macbeth must have seemed a dream ticket: a can’t-miss subject with strong, memorable characters, a gripping story, and elements of theatrical blood and thunder large enough to sustain Operatic interpretation, perhaps even demanding of it. Though its first staging went comparatively well in 1847, mainly due to the level of genuine acting performance now demanded of his singers, it was revised in 1865 for Parisian tastes, and has enjoyed popularity ever since.

Of course, Macbeth isn’t without its own troublesome baggage as a play, not least of all the perennial fascination with Lady Macbeth very often over and above her husband, and it often takes a very skilled actor and very careful direction to keep the play at a sufficent level of tension and in balance around its actual title character. Verdi’s 1865 version of the Opera actually enhanced the role of Lady Macbeth to the detriment of the haunted Laird himself, and was largely lauded for it. Certainly she is given her own reflective Aria in Act II, and this gives more force to her legendary sleepwalking scene in Act IV because she has had more grounding and more presence.

Opera Ireland’s production boasts a very forceful Lady Macbeth. Canadian Sporano Michele Capalbo is given all the room she requires to dominate the show, from her distinctive red costumes standing out against the otherwise largely black and white decor to the fact of her powerful voice carrying clearly even over and above the fairly numerous choral segments. Her performance is not bad in dramatic terms, maybe not so much as to erase any great theatrical interpretation one may have seen, but certainly registering a degree of concentrated determination befitting the role. Her sleepwalk scene is not truly terrifying, but it is effective – moody, at least.

The production has been given a sort of high-concept treatment by director Deiter Kaegi. The fairly straighforward costuming of Scottish nobility as twentieth century fascists is familiar enough to barely warrant remark, but Ferdia Murphy’s ambitiously simple black and white portable sets (mainly consisting of two huge rotating painted pieces that form archways, corridors, doors, forests – pretty much everything – aim for a kind of expressionist minimalism that reads on one hand as a kind of style statement and on the other as a kind of recession-economy gambit that doesn’t always work. There’s a certain lack of polish and precision in the way in which this set morphs and moves, and this same sense of uncertainty dogs much of the staging. The choral scenes are more restless than intense, with singers wavering and wandering around instead of helping to keep the focus on the principals. Even the opening scene in which the behooded, red-armed Witch Chorus performs a kind of evil dance is lacking in a sense of order in its chaos, and the result falls just short of serving the dramatic needs of the scene.

The Gaiety stage is so often unkind to Tenors that it did seem that the Bass and Baritone dominated casting of Macbeth would work well, but though good turns from American Bass Valerian Ruminksi as Banquo and Bulgarian Tenor Kamen Chanev as Macduff provide the production with some of its most effective scenes, Irish Baritone Bruno Caproni disappoints as Macbeth. His technical command is not so much in question as his dramatic performance, so key an element even in Verdi’s original production and so demanded by this subject that it cannot pass without notice. When one closes one’s eyes and listens, he has clarity and expression, and his vocal rendering of the Act IV lament as Macbeth contemplates his downfall has plenty of hall-filling gusto. But his pop-eyed, blustering, physically unimposing ‘stage’ Macbeth gives a lie to the dramatic core of the play. This is not a Macbeth you can believe in, and all eyes thus duly turn to Lady Macbeth, bringing about the pitfall that can dog any theatrical or musical presentation of this story. We need to fear Macbeth, to pity him, and to despise him. In Caproni’s performance, we can only politely applaud his vocal talents and must suspend our capacity to engage with the drama, and I’m not sure that would have been even what Verdi would have wanted.