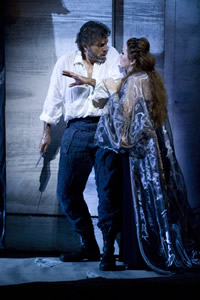 After the play by William Shakespeare

Theater folk call it “that Scottish play” because it is considered extremely bad luck even to whisper its name. Not true in the opera world and, if you can get Thomas Hampson in the title role, Macbeth can be a veritable gold mine of good fortune. San Francisco Opera has lucked out this season, not only to get the fantastic Mr. Hampson, the pride of America and possibly the best baritone in the world today, but also David Pountney’s innovative and visually arresting production, originally mounted in Zurich in 1991.

From the stunning drop curtain, which pictures a partial clock with an enormous red hand against a background of trees (the hand will move as Macbeth’s time runs out and the trees of Birnam Wood march against him) to a central glass cube in which much of the interior action, especially the plotting of Mr. and Mrs. Macbeth, takes place, Stefanos Lazaridis’ set design is a delicious visual banquet. The witches, whose ranks composer GiuseppeVerdi increased from Shakespeare’s three to an entire chorus, are especially eye-catching. Young, old and in between, these are no hags but stylishly dressed babes, mostly in shades of red which contrast nicely with the predominate palette of black and white and earth tones. They smoke, type, dance and one even washes the floor in a full-length evening gown in a truly spooky – if atypical — Walpurgisnacht.

But even this Macbeth is not without a slight curse. Hungarian soprano Georgina Lukacs has an impressive resume, including Lady Macbeth at Covent Garden but she was an unhappy vocal choice for this production. She looked great and, as long as she sang in her middle or lower register, sounded fine. But anything higher and she positively screeched, her voice often as unpleasant as the character she portrayed. She was at her worst in the Brindisi, the light-hearted toast at the beginning of the banquet scene. As for her acting chops, she gnawed on the scenery in high operatic diva fashion and it was not until her final moments – the famed sleepwalking scene – that you got a glimpse of a real, suffering human being up there on the stage. No longer the virago of the preceding action, she performed with a moving restraint and, since the music lay somewhat lower here, sang well.

Hampson, in contrast, is a master of economy, using stillness as effectively as movement. His early “Is this a dagger that I see before me?” was so convincing in its remorse you actually found yourself rooting for the murderer. Much mayhem later, long-haired, disheveled and wild-eyed, he obviously is a man who is falling apart. But that is the actor, not the singer. His final soliloquy is as fine and full of power as anything that has gone before.

Excellent support was provided by Raymond Aceto as Banquo (before his untimely demise) and former Adler Fellow Alfredo Portilla as MacDuff, the latter’s big tenor aria of lament for his murdered family beautifully rendered. The San Francisco Opera chorus, whether as witches, soldiers, courtiers or unhappy peasants, dispatched Verdi’s many large ensemble pieces with its usual skill. Massimo Zanetti was in the pit. –