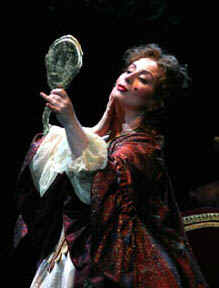 Puccini’s opera, based on Abbe Antoine-Fran�ois Prevost’s novel L’Histoire du Chevalier des Grieux et de Manon Lescaut, is set in France a few years before the French Revolution. It tells the story of a young girl diverted from a convent life by two polar-opposite suitors. Assigned by their father to escort Manon to a convent, brother Lescaut (Roberto Servile), known only by his last name, takes time out to indulge in women and cards. Meanwhile, Manon meets the poet Renato de Grieux who instantly falls in love and persuades her that a convent life would waste her beauty and her life. Simultaneously, the king’s tax collector Geronte de Revoir (William Parcher), a filthy rich dirty old man, plots to kidnap Manon.

Although Manon runs away with the poet, her brother predicts to the foiled Geronte that she will come back to the tax collector because she will tire of the poet’s poverty. Act II sees that prophesy realized and, in this production, presents Geronte’s financial status beyond wildest imagination with gargantuan cabinets displaying his wealth. During a costume party, Villarroel as the bored Material Girl Manon appears inside one of Geronte’s huge and mirrored cabinets trying on various pieces of jewelry. Bird in the gilded cage, she is addicted to the jewelry, repulsed by Geronte’s attention, and sorely misses des Grieux. Ever the enabler, Lescaut produces des Grieux and shortly thereafter, Geronte walks in on the lovers and calls the police. The poet tries in vain to hurry the girl out of the tax collector’s palatial Parisian home, but Manon dallies over what jewelry to take. Manon is arrested for prostitution and theft.

The poet follows the girl, who is imprisoned near the port of Le Havre pending deportation to America. Failing with Lescaut to spring Manon from prison, des Grieux begs the captain of the ship headed to a penal colony in Louisiana to let him accompany Manon to America. The lovers escape and find themselves on an American desert without water or shelter. She dies in his arms.

Except for some initial problems with sound projection over the full and robust orchestration, all of the singers delivered the music in accomplished performances.This opera puts huge demands on the lead male role, des Grieux, who must sing frequently and whose arias often play in the upper range of the tenor voice. Technically Franco Farina sings this demanding part well. Still, the overall cast performances come up short because chemistry between the characters never ignites.

The spark is particularly missed in Villarroel, who must first convince the audience how young and foolish she is. Although Villarroel credibly portrays her love for des Grieux and her suffering as she unwillingly dies in the American dessert, she never anchors her character as an innocent and unsophisticated girl. The resulting gap in the characterization gives Farina little to respond to. Manon is pretty, but is that enough to make the poet so crazy that he says on two occasions that he will kill himself and that he actually boards the prison ship with Manon to an unknown fate in America? This girl’s story was also the inspiration of operas by Massenet and Henze which suggests that Manon is a more compelling character than the one Villarroel realizes here.

And the spark is missing in other characters too.Roberto Servile as Lescaut misses an opportunity to deepen the relationship with his sister. Does he produce des Grieux because he loves his sister or because he wants to get her in trouble with the old tax collector? After all, he seems to be shadowing her not just as her protector but also as a source of personal gain. His body language and voice inflection didn’t offer any nuance to suggest his thoughts and motivations. The libretto doesn’t reveal why Geronte is chasing after this particular young woman, but Parcher’s performance shows neither his yearning for the girl nor his suffering as a result of falling for her.

The value in experiencing Manon Lescaut, an opera that is not often produced, is that the audience gets an opportunity to understand where Puccini started his hugely successful opera career. Stylistic features, harmonies, phrasing and melodic lines in this opera reappear in La Boheme, Tosca, and Madame Butterfly. What is different about Washington National Opera’s production of Manon Lescaut is that stage director John Pascoe and Maestro Placido Domingo have moved the orchestral intermezzo from its usual place between Acts II and III. In this production, the intermezzo introduces Act IV. While the orchestra plays the intermezzo, a film of ocean waves is projected on the stage set and just before the music finishes, an image of des Grieux holding Manon in her tattered dress is superimposed on the roiling waves. Psychologically, the relocated intermezzo coupled with the projected imagery successfully gives the audience time to absorb the relationship between the lovers. Now if only the lovers themselves would set the Opera House on fire!