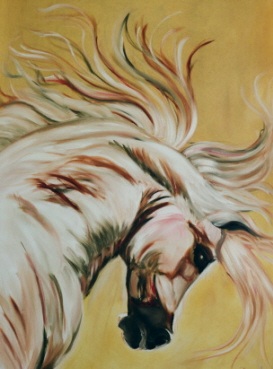 In the early eighteenth century, Russia was involved in what was known as the Great Northern War. This was largely fought over control of the Baltic between Tsar Peter the Great’s increasingly centrist Russian Empire, Swedish King Charles XII (who already occupied part of the region), Poland, and the Hetman (a kind of regional regent) of the Ukraine, Ivan Stepanvich Mazeppa-Koledinsky. Interpretations differ, but the essence of the dramatic conflict that frames the story of Tchaikovsky’s Opera is that Mazeppa made a bid for independence of a kind by siding with the Swedes against the Tsar. Prior to this actually happening, he was denounced by friends and associates (one of whom was his father-in-law), but luckily for Mazeppa, they were not believed by the Tsar and instead turned over to him for torture, forced confessions of conspiracy, and execution. Mazeppa then made his pact with Charles XII and the Poles, and came out on the losing side in the Battle of Poltava (1709), which ultimately consolidated Peter the Great’s hold on the Ukraine.

Tchaikovsky’s Mazeppa is not a popular work. It is rarely performed, barely known, and of limited importance in the maestro’s repertoire in terms of the history of music. Part of the reason for its invisibility was the taboo status of the subject within the Soviet Union, where Mazeppa’s perceived treachery would certainly make him a problematic figure for any representational ambiguity (as there is here). But even without this restriction, Mazeppa wasn’t a work audiences were crying out to see again after its less than stellar first appearance in 1884.

There’s a good reason Mazeppa was underground for so long, and it’s not just to do with political expediency and censorship. Inspired by Pushkin’s poetic interpretation of the Battle of Poltava (1709), where the personal and the political seemed to intertwine so readily and dramatically, Victor Burenin’s libretto is an unholy mess. Confused about its own focus, the story unfolds with great clumsiness, hamfistedly careening from scenes of domestic turmoil that supposedly flesh out the great historical drama afoot in the background to highminded speeches about treason and the right of self-determination. It is never very clear who exactly the protagonist is or with whom our sympathies are supposed to lie (even nominally), and though the title suggests that it is Mazeppa (Ivan Stepanvich Mazepppa-Koledinsky), the primary dramatic arc follows his wife (and godchild) Maria from the opening aria to the closing, though she also disappears during crucial ‘political’ scenes in the middle including the torture and later execution of her father, Vasily, by her husband’s men. However even Maria is a yo-yo figure, her emotions (and her attitude towards her husband) changing dramatically from scene to scene to the point where it’s no surprise she eventually goes mad.

In short, the plot is poorly conceived and the characters badly drawn, conceived of purely in terms of dramatic highpoints and discreet emotional registers, and painfully contrived at every turn. Mazeppa veers from hero to villain not so much because history can sometimes be that way, but because Burenin doesn’t seem to know what to do with him or how to orient the audience towards him. He seems to find a lot more mileage in Maria, but being at the fringes of the ‘great narrative’ that is history, he has to come up with reasons to focus on her, and finds his historical perspective on Mazeppa blurred as a result.

Tchaikovksy was apparently so moved by the romance and drama of this tale (oft told prior to his version) that one of the first things he wrote formed the basis of the central love duet between Mazeppa and Maria. This is preceded by an aria by Mazeppa himself, who sings the praises of the Ukraninan night and stars. In dramatic terms at this point in the libretto, this plays like Satan singing “Up There” in South Park, Bigger, Longer & Uncut (1999), only without the irony. Framed in the opening scene as a leering, lecherous cradle-robbing houseguest from Hell who whips out his gun (yes) when his father-in-law to be forbids him to marry his daughter, he’s no candidate for our sympathy, and no less so is the bizarre girl herself, who all too readily abandons her family for the older man because of his aura of power. That she then appears to sing a duet of their love and passion when she is clearly riding the wave requires delicate handling (much as he may be despised, Andrew Lloyd Webber managed to wring pathos out of a not dissimilar personal/political dynamic in his profile of Eva Peron). Burenin doesn’t handle it delicately, and simply lays on the melodrama with a trowel, then limps along to the next awful scene.

But you know, above all of this thoroughly misconceived textual drama hovers Pytor Ilych Tchaikovsky. Every child who has come to love music through his work cannot but find delight in an encounter with something rare and unfamiliar in Mazeppa itself. The musical score is rich, lush, robust, delicate – full of all the passion and flavour we could expect from the composer. His casting of voices in Baritone, Bass, and Chorus is similarly muscular and exciting, there is an entr’acte which dramatises the Battle of Poltava which easily stands alone as a piece of musical composition worth listening to, and were it not for the fact that there are characters on stage singing gibberish, it would be a very pleasant experience for the ear and the heart.

From this point of view Opera Ireland’s staging of the work is a singular treat. Though the Opera has experienced something of a revival since the Ukraine achieved actual political independence in the 1990s, it is still a pretty rare piece to see performed, and Opera Ireland bring it cautiously to the stage in tandem with the surefire hit Don Giovanni. Kudos is due for the ambition alone, and Mazeppa is a joy to listen to.

That said, director Deiter Kaegi and costume designer Bruno Schwengl have unwisely attempted to add even more confusion to what was already an ungodly mishmash on a textual level with a design concept that moves the action from the early eighteenth century to somewhere in the twentieth. A huge Soviet flag flutters across the stage at one point, so we have to assume the setting then predates the disintegration of the Soviet Union, but it is very hard to tell. Tempting as it must have seemed to throw in a touch of contemporary political resonance by decking out the characters in (comparatively) modern dress, combat fatigues, and arming them with guns that go bang, it really is just adding more layers of obscurity. It just doesn’t add up politically, any of it, and this becomes maddening as the political specifics of the historical situation continue to be sung about with all the inherent ambiguity created by Burenin’s libretto. How we are supposed to read the factions here in terms of recent history, or engage with the ethics of torture and execution in a twentieth century context is something beyond consideration here – we are given no clue, just lots of iconography. Jackbooted Soviet soldiers wielding machine guns really aren’t the equivalent of eighteenth century Cossacks, not without a lot of explanation and contextual bracketing that just isn’t there.

Consider the clock: during the second act scenes in Mazeppa’s castle (office), there is a clock on the wall behind his desk. It is set to actual time. I found myself checking this, and wondering why. In the scene where Maria’s mother comes to confront her and plead for clemency for Vasily, she refers to the execution as taking place ‘today’, indicating that we are approaching dawn (and this tallies with Mazeppa’s nighttime reveries about the stars). So why, then, is the clock there, telling us the actual time in Dublin in March 2009? (between about ten to ten and half past as the act progresses, if you’re interested).

There’s more like this and worse – little details and big concepts in the presentation that are just so much dandruff on the head of music you just want to listen to. Alexander Anissimov’s conducting is superb – giving Tchaikovsky his full range and providing the audience with all the glee of that childhood encounter with The Nutcracker or the 1812 Overture. Choral direction by Ilona Stepan is also great, as are the vocal performances by the Chorus themselves. The vocal performances by the leading cast are also generally good, but, as befits such a cluttered piece, some of the dramatic acting is hard to connect with. Sinéad Mulhern in particular, in the role of Maria, though beautifully modulated vocally and sweet to listen to, more or less locks her face in a kind of constipated frown within a few minutes of the start and leaves it there, hoping she’ll find a way through the intepretative minefield in one piece. I have every sympathy with her.