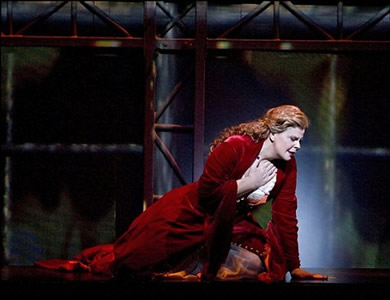 Libretto by Almire Gandonnière and Berlioz

Near the end of the first half of the Metropolitan Opera’s new production of “La Damnation de Faust” comes a nifty bit of stagecraft: soldiers defy gravity and walk straight up the set, reach the proscenium and then fall, in slow motion, into the arms of the women who love them. It’s the latest in a series of coups de théâtre laid on Hector Berlioz’s “dramatic legend” by Robert Lepage, the Quebecois director renowned for his Cirque de Soleil entertainments, in his Met debut. But like much of Holger Förterer’s computerized projections and technological whiz-bang that precede it in the Met’s first interactive opera, these maneuvers, impressive as they appear, have scant connection to the music or to advancing the tale (based on Goethe) of a disillusioned man doomed by his desire to shake his romantic blues. It’s a disconnect that plagues this production, however ambitious, from start to finish.

It’s hard to fathom how such a discrepancy between musical meaning and scenic representation could have occurred. Though the creative team is to be congratulated for such an ambitious undertaking, it’s disconcerting that such enormous resources have been devoted to a production that never fully aligns its visual wealth with its musical riches. Certainly, the conductor James Levine has a feel for this work, having led the Met’s first performance in 90 years (albeit in concert version at Carnegie Hall in 1996). His attraction to the score is evident in the care with which he conducts, expertly modulating the orchestra’s sound when the singers come to the fore but not holding back during the orchestral passages, which beautifully underline the events triggered by Faust’s crise de conscience. Levine’s sensitivity shows in his command of Berlioz’s often fantastical interludes, extracting the right amounts of tension and ebullience.

Nevertheless, Lepage’s vision upstages the music at nearly every juncture, beginning with the peasants’ opening song. Here, the chorus (expertly prepared by chorus master Donald Palumbo, who is curiously missing from the bios, credited only in a perfunctory one-liner—even as the costume designer, Karin Erskine, merits a paragraph), delivers its rousing call to celebrate in a staid formation at the bottom of a set (by Carl Fillion) divided into two dozen boxes, a la “Hollywood Squares,” each backed by a reflective panel onto which images are projected. Such an arrangement also constrains most of the staging to a narrow walkway on several stacked levels, confining the dancers (the “esprits” Méphistophélès summons in his plan to doom Faust) to a space no wider than a subway car and locking them into repetitive, uninteresting twirls and guardrail poses. Other dancers rigged to flight cables make a series of athletic though distracting mid-air loops, harnessing their cumbersome machinery to the set’s scaffolding. The effect is intended to be exhilarating; in fact, it’s mechanical and once again intrudes on Berlioz’s music and underlying themes. Only in the final scenes do the music and complicated sets function harmoniously (though the decision to project several galloping steeds at the climax rather than the required two is another example of Lepage’s overkill).

When they are not being undercut by swarms of swooping birds, shimmering fields, and leaf-shedding trees, the cast soldiers on in fine form. As Méphistophélès, bass-baritone John Relyea brings a sexy, virile stamp to his performance, an apt tempter to lure Faust, and when his voice deepens from dashing to diabolical, he inspires fear and dread. Mezzo-soprano Susan Graham is likewise a strong Marguerite, oozing suppressed passion in “D’amour l’ardente flame.” Though tenor Marcello Giordani begins strong vocally as Faust, he strained in the upper range of the love duet in the work’s second half, barely recovering for the famous “Invocation à la nature,” which he delivered competently, if somewhat dispassionately. (It’s also a mystery why such a powerful moment wasn’t milked for more dramatic video imagery, given that it evokes tempests and primeval forests.) Giordani’s performance encapsulates the underlying trouble with this production: despite all the impressive smoke and mirrors, this is a “Faust” whose corrosive ennui comes off as boredom.