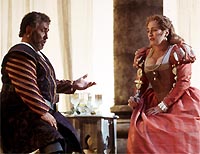 Both Shakespeare’s great tragedy Othello and Verdi’s opera adaptation, Otello, are highly focused works, centered on the character of Otello, a Moorish general who leads the Venetian army. Of the three central characters, only Otello changes over the course of the work and that trajectory makes for powerful drama. Desdemona, Otello’s beloved wife, is all goodness and faith; she becomes the victim of the man who loves her, but whose uncontrolled jealousies (reflecting underlying insecurities) lead to tragedy. Iago, Otello’s trusted advisor, is all evil and meanness; he malevolently twists his patron’s jealousy into a plot of revenge that fully succeeds–and results in his own downfall as well, ironically, denounced by his own wife.

Otello was Verdi’s penultimate opera (followed only by Falstaff) and is arguably his dramatic masterwork. The superb libretto by Arrigo Boito cuts the Shakespeare to its essentials, leaving room for the full expression of the bigger than life emotions that charge these characters. The dramatic conflict that moves the action forward is in the interaction of Otello and Iago, protagonist and antagonist, as the latter conspires against the former. For a performance to succeed, both of these roles must be cast with first rate singers who must also be first rate actors.

It is not surprising, then, that few productions of Otello are scheduled these days–surely far fewer than impresarios would like, given the brilliance of the work. The problem is the lack of mature artists (particularly tenors) with the vocal and thespian resources to fulfill the demands of these roles. Placido Domingo had a long association with Otello, but in recent years has been concentrating on other roles.

The only other outstanding candidate is Ben Heppner, the leading Tristan of the moment, who calls himself a "lyric tenor with a larger voice." Heppner sang his first staged Otello in Chicago in 2001. It was for Heppner that San Francisco Opera’s Pamela Rosenberg scheduled an Otello for the 2002 season. But in March, Heppner backed off of the role, canceling scheduled performances in San Francisco and Vienna.

Such a cancellation, given that opera scheduling is now done several years in advance, leaves a general director in an impossible quandary. The show must go on, but even with six months’ notice, there simply is not an alternative tenor up to international standards. Ms. Rosenberg ended up with two alternating the role; this reviewer heard Jon Fredric West perform. Mr. West’s credits indicate that he has sung in the major opera houses of the world and, in kindness, it will be assumed that he performs creditably in other roles. His Otello was musically and dramatically inadequate, his voice forced and wobbly, creating sounds to make one cringe.

Without an Otello, the show pretty much falls apart. Sergei Leiferkus’ Iago was generally listless and unimpressive; in the great "Credo" aria, with its dramatically thrilling orchestral accompaniment, his voice seemed small and dry and the drama was notably absent. At other times, whenever he seemed appropriately to rise to the tensions of a give-and-take with Otello, West’s contribution would end any fleeting hopes that might have been sustained by optimists in the house.

Patricia Racette, who has become something of a house favorite in San Francisco, is an intelligent singer, with accomplished musicality, but a limited instrument. She has to push to project to a large house. Her solution here, and in her Liu earlier this season, seems to be to hold back in the first half, and save the big push for later on. Her voice simply does not have the power to soar over a big chorus, such as the great third act finale of Otello. (In any event, that scene sounded like dispirited chaos, rather than like a well-meshed ensemble.) Racette’s "Willow Song" and "Ave Maria" in the last act exhibited her best attributes, but by then it would have taken a miracle to rescue any drama out of this debacle.

The San Francisco Opera Chorus was up to its usual fine standards and Zack Brown’s sets, from Washington Opera, were attractive–a clean, heavily architectural look with little furniture, enhanced by fine lighting by Thomas J.Munn.