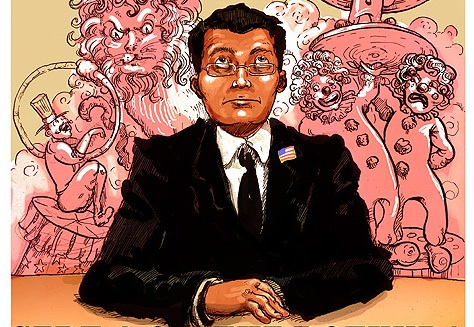 Even though the Rotunda in West Philly was only a quarter filled for the premiere of composer Melissa Dunphy’s new choral work ‘The Gonzales Cantata‘ there was an undeniable sense of musical occasion for those in attendance.   Dunphy piqued curiosity with this timely choral work by scoring the actual transcripts from 2007 infamous inquest into the political implications of Attorney General Alberto Gonzales’s firing of nine federal judges because they were not towing the conservative judicial line.

‘Gonzales’ is already a breakout show from the Fringe wing of the Philadelphia Live Arts festival which has already reached past local media to MSNBC and even Comedy Central.   But past the political intrigue, the musical architecture is airy, steeled and witty.

Later Williams uses that upper register to play Senator Diane Feinstein.    Dunphy switched genders of the principals because she was shocked that Feinstein was the only woman on the hearings panel.  The joke keeps giving since all of the lead male characters are sung by woman.   Enter Mary Thorne who stands in the docket as Alberto Gonzales in a tiara and beauty pageant sash when Jessica Lennick singing Patrick Leahy begins the cantata.

Even though Dunphy doesn’t take any broadside hits against a Republican administration, she reflects on what was constitutionally at stake during these hearings and through the transcripts simply lets ironies of patriotic sanctimony from Gonzales, Hatch, Grassly, Sessions and Specter speak for themselves.

Gonzales’s infamous memory lapses and his 72 pronouncements of ‘I don’t recall’  is neatly dispatched by Dunphy in a wily roulade run.   More orchestral comedy comes as the Senators intone Gonzales’s grave errors in judgment.   At key moments, the 20 strong chorale thunders in, wielding evenhanded justice, in deeply sonorous and sane balance.

The ten piece chamber ensemble maintains power and delicacy throughout, led by Julienne Leung luminous violin.   Dunphy’s musical streams rush by with breathtaking clarity, within them there are time-traveling musical interlocks- pristine baroque progressions give way to Prokofievean decrescendos.   Her music –  libretto relationship is completely supple, a rare quality in such a young composer.

Dunphy, who has garnered great reviews as an actress in  productions of Shakespeare plays, makes another entrance as a masterful composer with a masterful operatic satire.