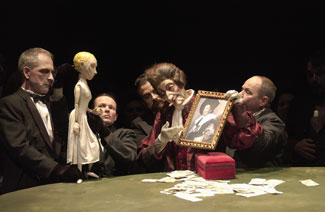 Based on Alexander Pushkin&#146;s 1833 short story, Tchaikovsky&#146;s penultimate operatic work is a musically idiosyncratic mixture of his recognizable orchestral style with elements of pastiche. Not renowned as a composer of opera, Tchaikovsky had hit a bullseye with a previous Pushkin adaptation, Eugene Onegin in 1879. Admitting an irresistible attraction to operatic form in spite of his inability to master it, the maestro used the folk origins of Pushkin&#146;s verse novel to present a series of interlinked scenes rather than a fully realized grand opera. The Queen of Spades followed in 1890, and was again a success (though others in between were not). More formally rigorous than Onegin yet not entirely traditional, it offered a mixture of traditional themes and motifs with moments of surprise and even self parody.

The opera departs from Pushkin&#146;s original story quite significantly. In both versions Hermann, a young soldier, is haunted by the rumor of a mysterious secret of an unbeatable sequence of cards. In Pushkin, he stops at nothing to learn the secret from the elderly countess who is said to know it, including seducing her ward Lizaveta to gain access to her. His dreams seem thwarted when he frightens her to death before she can reveal it, but he is then visited by her ghost, who orders him to marry the girl and play the cards exactly. The countess has the last laugh however when the final card turns out to be not the promised ace, but a winking Queen of Spades, which drives Hermann mad and sends the ward into a dull marriage to "a very amiable young man in the service of the state."

Michael Dungan reads Tchaikovsky&#146;s more romantic interpretation of the story (from a libretto by his brother Modest) as a response to the composer&#146;s empathy with the central character. Over the years Hermann&#146;s passion and shame has been read as a masked response to Tchaikovsky&#146;s homosexuality. But as Dungan notes, homosexuality was less socially taboo in nineteenth century Russian high society than might be presumed, and it is more likely that his empathy was rooted by a simple sense of connection with the soul of a fellow gambler.

The opera softens the characterization of Hermann by making his affection for Lizaveta more genuine and having the latter engaged to an aloof aristocrat whom she does not love. The action follows much the traditional trajectory of a standard opera, yet the composer enjoys several subversions in his incorporation of unexpected musical moments which cast tonal complexions on the drama, including a quasi-parodic ballet and a masked ball at the beginning of Act Two, of which Dungan observes "Unsuspecting audience-members, returning to their seats after the interval, could be forgiven for wondering if they had somehow wandered into the wrong theatre. Mozart seems to have replaced Tchaikovsky as the curtain rises to an introduction and chorus…"

Opera Ireland&#146;s current production of The Queen of Spades is a sumptuous affair. It is a grandly realized spectacle directed with energy and depth by Dieter Kaegi, lustrously designed by Joe Vanek, and it features an unforgettable performance from Irish opera legend Veronica Dunne as the countess. Though her singing voice is now frail and cracked, Dunne is still a commanding stage presence. Her dramatic characterization far exceeds the expected level of acting in most operas, and is often as frighteningly intense as the best theatrical performances. Her sweet, clear singing is heard only in snippets, but it is fitting that a woman who has now trained two generations of singers should take her place on stage at what must rank among Opera Ireland&#146;s triumphs. She is joined by a front rank of mostly Russian performers, but also by excellent and musically vital contributions from the chorus under the direction of Cathal Garvey.

After an unsteady start in which Tchaikovsky&#146;s evident musical discomfort is initially unsettling, the opera develops gripping depth and tension, notably from the bedroom scene in which Hermann faces the countess and tries to force the secret of the cards from her. Vanek&#146;s designs are deceptively simple, but add hugely to the atmosphere of several key scenes. The designer makes use of hard angles and a series of portable squared arches to suggest and create immense depth on the Gaiety stage. Together with Paul Keogan&#146;s crisp, layered lighting, the visual impact alone is very great. The sense of depth is especially notable in the scene in which Hermann is haunted by specters of the mourners at the countess&#146; funeral. The chorus, standing in the middleground, are cast in a cadaverous green while Hermann squirms upstage under the hellish glare of spectral light and the countess sits downstage on her funeral altar silhouetted by a white wall upon which a succession of doors slowly open into darkness. It is a chilling scene over which the disembodied voice of Dunne slithers with menace.

Kaegi&#146;s ability to make use of this subtly suggested space to stage busy yet completely coherent scenes keeps things constantly dynamic. There is a sense of controlled vastness to the production which is thrilling to watch. The balance between ensemble and choral scenes provided by the composer helps to maintain a quick pace, as do the musical digressions designed to allow Tchaikovsky to indulge himself. Characteristically lush orchestration conducted with appropriate gusto and delicacy by Alexander Anissimov sits alongside amusements including a splendid drinking dance brilliantly performed by the male chorus and the intentionally satirical quotation of Gretry&#146;s Richard Coeur-de-lion sung, in French, by Dunne.

Peter Svensson demonstrates subtlety and variance in the tenor role in spite of on-the-night troubles with the high notes in Act One, and also portrays Hermann&#146;s descent into madness with believable conviction. Victoria Kurbatskaya is good as Lizaveta, though she is somewhat upstaged by mezzo-soprano Tatyana Kaminskaya as her friend and confidant. Irish baritone Sam McElroy makes a strong, brooding Prince Yeletsky, and the final confrontation between he and Svensson is powerful both vocally and dramatically.