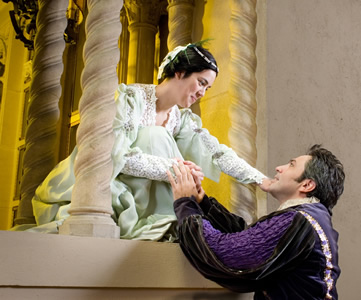 The wonderful thing about small opera companies is that what may be lacking in grandeur often is compensated with ingenuity. While the tiny Julia Morgan Theater stage in Berkeley cannot accommodate a cast of thousands (how on earth are they going to mount “Aida” in July?) it can become a ballroom, a street in Verona, a friar’s cell, a bedroom and a tomb with just a little set dressing (kudos to designer Phillip Lienau). And the brilliant concept of excising the operatic recitative and substituting Shakespeare’s words moves the plot forward seamlessly, giving the audience what is basically a two-fer, an opera and a Shakespearean play.

Berkeley Opera’s “Romeo and Juliet” has much to recommend it, especially if you lower the expectations that you would normally bring to San Francisco Opera or the Met. But don’t lower them too much. Musical director Jonathon Khuner, who conceived this production along with translator/lyricist Amanda Moody and director John McMullen, has done duty at both those worthy institutions, as assistant conductor, in musical preparation and in the prompter’s box. In fact, that is his day job and his musical values are sound. The orchestra was one of the best things about the current “Romeo.”

Which is not to denigrate the performers, a spirited bunch of singing actors? Although in the case of the two lovers, tenor Jimmy Kansau and soprano Elena Krell, the acting sometimes outclassed the singing. Krell, especially, said Shakespeare’s lines like a 13-year-old in love for the very first time, imparting a freshness and urgency to an old tale. If her voice was sometimes shrill at the top she may be forgiven. Kansau was a little wobbly and it was hard to always catch the words through his Venezuelan accent. The best vocalizing of the night was done by Igor Vieira as Mercutio. The Brazilian baritone was so good, one really hated to see him die at the beginning of the second act.

Convincing swordplay, choreographed by fight director Dave Maier, and period costumes by Abra Berman – who really outdid herself with Juliet’s gowns – complete the picture. One costume quibble: the men’s codpieces – especially that of Count Paris, which was made of silver and looked positively lethal – were a bit much. This may or may not have been the fashion in the late 16th Century, when the play is set, but in 2007 it is simply jarring and provoked some snickers.

Although highly successful for the first year after its 1867 premiere, this opera never achieved the lasting popularity of the composer’s earlier “Faust.” It is more delicate and refined but lacks the blockbuster arias and choruses of the earlier work. There really are only three “big numbers” in the whole thing: Juliet’s first aria, Romeo’s “Ah, leve-toi soleil” (“Arise fair sun” in Shakespeare) at the beginning of the balcony scene, and the lovers’ duet, “Nuit de hymenee,” which becomes “No, it is not the lark” as they are about to be torn apart on their wedding night. Yet, there are many lovely, quiet moments: the wedding scene in the cell of Friar Laurence (John Bischoff) and the chorus of mourning. Other delights: The chorus singing Shakespeare’s prologue as part of the overture, Leslie Hassberg as a bawdy, lovable nurse and John Minagro, injecting a bit of the drunken lech into his Lord Capulet. Berkeley Opera’s “Romeo and Juliet” certainly proves the maxim that “less is more.”