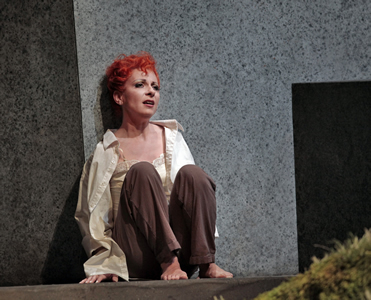 By Giuseppe Verdi
Libretto by Francesco Maria Piave
After a book by Alexandre Dumas fils
Santa Fe Opera
In repertory through August 29, 2009
http://www.santafeopera.org/

There is only one word for Natalie Dessay’s performance in Santa Fe Opera’s “La Traviata.” Wow! And that hardly does justice to the diminutive French soprano’s finely nuanced portrayal of Violetta Valery, the Parisian courtesan who gives up a life of frivolous luxury for love, only to die, penniless and alone. Dessay may be the finest singing actress on the planet and this may be an opera buff’s performance of a lifetime. From her initial solo aria “Ah, fors’ e lui,” to the poignant “Addio del passato,” sung on her deathbed, she held the audience in an unbreakable magic spell.

Not to disparage the other principals, all excellent. Handsome Saimir Pirgu was a soulful foil in the first act to Dessay’s fun-loving courtesan and he sang beautifully as the heartbroken abandoned lover in Act Two. Giorgio Germont, Alfredo’s uptight, moralistic father, was an impressive Laurent Naouri (the role will be taken by Anthony Michaels-Moore for two performances in August). Tall and imposing in his top hat and frock coat, his famed set piece “Di Provenza il mar,” brought down the house.

I always have felt that the long Act Two scene between Violetta and Germont, where he demands that she give up her liaison with his son for the sake of propriety, is the crux of this opera but often it can be thrown away, sandwiched between the two flashier party scenes that enfold it. Naouri and Dessay restore it to its proper dramatic power and it truly was an unforgettable operatic experience.

Bravi as well to the Santa Fe orchestra under Frederic Chaslin, a compatriot of Dessay, and the large chorus of courtesans and the men who patronize them. Some of director Laurent Pelly’s concepts were brilliant, especially the flash-forward that had Violetta’s funeral procession move slowly across the stage as the overture played. Having the “bullfighter” ballet, always a silly interpolation in an otherwise-coherent score, grow organically out of the party scene was another good move. But I can’t say the same for his costume designs, especially unflattering for Dessay. The set by Chantal Thomas, essentially a multi-tiered conglomeration of boxes, also was problematical: working fairly well in the last two acts, but not in the first two.

But a few wrongheaded visual choices do not an opera experience make. Natalie Dessay in “La Traviata” is well worth a trip to Santa Fe.