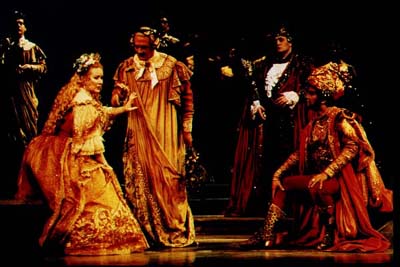 What better sort of character to make the heroine of an opera? Semele was a Theban princess and the only mortal to be the parent of a god, that God none other than Dionysus/Bacchus, offspring of Semele’s union with Zeus/Jupiter. Of course, Zeus’ wife Hera/Juno was less than pleased with the goings on, so she schemed Semele to a nasty end, consumed in flames from the lightning that radiated from her lover. Dionysus, a heaven-sent son, rescued his mother from Hades, made her a goddess, and set her up in style on Mount Olympus, a very good address indeed.

Handel wrote Semele (to a libretto by William Congreve, in turn based on Ovid) as an opera, but in its early productions it was staged as oratorio; styles had changed in London and oratorios were a lot easier on the budget as well. Opera or oratorio, there is a certain static quality to these baroque works, constructed of a series of set pieces; modern audiences are generally more accustomed to a less stylized dramatic flow. But Handel oratorios can play well as fully staged opera (see our review of Saul) and Semele is rich in elegant music affording ample opportunities for virtuoso singing and telling characterizations.

Handel begins with Semele abandoning her betrothed, Athamas, in favor of her celestial lover and ends with her death. (Dionysus has been left out, though in the Copley production he is given a token appearance in the final tableau.) This Semele, initially motivated by passionate love,later becomes dissatisfied, coveting the immortality of the gods. Her presumption and vanity are in the classic model of hubris, so that her fate – death resulting from exposure to the full godliness of her lover – constitutes a fitting and ironic resolution in the traditional classical mode.

San Francisco Opera has imported John Copley’s 1982 production from Covent Gardenand managed to assemble Mr. Copley to direct, Charles Mackerras to conduct (some performances) as he did for the 1982 production, and Ruth Ann Swenson for the eponymous role, reprising her London success in the 1996 revival.

Copley has found just the right tone to bring Semele to a modern audience, treating the music with great respect, but drawing out much surely intended humor and gently satirizing the form as well. The sets are in the style of the early 18th century, even to mimickingthe effects of the stage machinery of the period. In the midst of classical columns and outsized vases, the lead women wear elaborate, layered gowns in the 18th century style, but highly theatricalized – there is an abundance of crinolines, brocades, nettings, trains, beading, tassels, jewels. It is an amusing excess, evincing thoughts more of upholstery than of haute couture. The men and the choruses are garbed more in the Grecian manner, the whole in a range of smoky colors, from pale beiges to soft pinks to faded lavenders, with the occasional highlights of red and gold. The period is rococo, but the look here somehow feels infused with a Victorian sensibility.

It is the women who dominate the proceedings and it is hard to conceive these roles better served than by Ruth Ann Swenson and Sarah Connolly, the latter in the dual roles of Juno and Semele’s sister, Ino. From start to finish Swenson is a source of pure pleasure, producing limpid tones and effortless fioriture. In the astounding aria "Myself I shall adore" she combines bravura singing with laugh-out-loud humor and, when you think she’s surely got to run out of steam, launches into yet one more display of exquisite coloratura. It seems that Diva Swenson doesn’t have to breathe as mere mortals do.

Connolly, in an auspicious San Francisco debut, sang impeccably with her burnished and precisely placed mezzo, displayed a great gift for comic acting, and radiated star quality of her own. In the much smaller role of Iris, Juno’s messenger, Christine Brandes added yet another fine voice and lively personality to the mix. Amongst the men, John Relyea, played dual roles as Cadmus (Semele’s father) and Somnus (the god of sleep). In solid voice, Relyea also displayed a Gilbert and Sullivan sort of comic talent as Somnus, complete with clouds of dust and a taste for underage girls. Brian Asawa as Athamas seemed strained and uncomfortable. As Jupiter, John Mark Ainsley did not seem to be operating in the same league as the women; last night, in any event, he did not produce pleasing sounds, but a consistently thin and unappealing tone. John Copley’s direction drew relaxed and natural performances from his leads, particularly in the comical bits, and he kept the onstage processions moving smoothly along.

It’s probably a good guess that this Semele was staged due to Ruth Ann Swenson’s relationship with San Francisco Opera. There’s nothing at all wrong with that. What seems a little sad is that without Ms. Swenson Semele might never have been considered at all. It surely will be remembered as a highlight of the season.