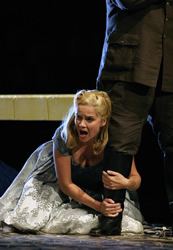 British composer Nicholas Maw’s impressive full-length opera Sophie’s Choice, based on William Styron’s well-known novel by the same title, made its fourth production and North American debut appearance by Washington National Opera during the period known as the Jewish High Holy Days, a set of holidays focused on renewal and forgiveness. Dove-tailing with this holiday, the story of Sophie’s Choice concerns a Polish Catholic Holocaust survivor, her schizophrenic Jewish boyfriend, and a young Southern writer who is befriended by this odd but colorful couple.

What Sophie cannot do is forgive herself for what happened to her children when she was accused and captured by the Nazis for conspiring against the Third Reich. Although Sophie had a friend named Wanda who was working against Hitler and urged Sophie to help, Sophie refused because she said it would jeopardize her children. Despite having a father who was a rabid anti-Semite, her Catholicism, her ability to speak perfect German, and her Aryan blondness, Sophie was unable to escape the Nazi concentration camp and she could not save her children.

This production by the young German director Markus Bothe pares down from the original 2002 world premiere at London’s Royal Opera House Covent Garden from four hours run time to three. With set design by Robert Schweer, Bothe’s production, which aired first in Europe at Volksoper Wien (Austria) and Deutsche Oper Berlin (Germany), also simplifies the scenic landscape to a minimalist stage on top of the Kennedy Center Opera House stage. Photographs of those presumably killed by Hitler’s henchmen provide a haunting universe of eyes behind the smaller stage. Reprising their celebrated roles in London are Austrian mezzo-soprano Angelika Kirchschlager as Sophie, American baritone Rod Gilfry as Sophie’s boyfriend Nathan, and Canadian tenor Gordon Gietz as Stingo. These roles are demanding and Kirchschlager, Gilfry, and Gietz perform well against each other.

Maw, who was first inspired by Alan Pakula’s 1982 film version of Sophie’s Choice (Meryl Streep as Sophie won an Oscar for this film), wrote the libretto to this opera himself after Styron declined. Adhering faithfully to Styron’s prose, Maw has not succeeded in providing satisfactory text. This story, which has a writerly landscape and quotes Emily Dickinson more than once, demands poetic condensing. For example, a line like ‘Soon, she began to bloom like a rose’ might have been shortened beneficially to ‘Soon, she bloomed, a rose!’ When Stingo sings to Sophie, ‘I want us to be married,’ one yearns for a simple, ‘Marry me.’ Despite this production offering a shorter run time, many scenes, especially the one in Act III with Sophie’s wartime friend Wanda, drag from the weight of too many words.

What works well is Maw’s neo-romantic music. Conductor Marin Alsop has delivered the balance and nuance required to ensure that both instrumentation and voice can be heard. Particularly beautiful are the lush and compelling arias that open and close Act IV by the Narrator sung by American baritone Dale Duesing. The Narrator is the older Stingo and although this character seems clumsily handled at the beginning of the opera, by the end his purpose seems clear and essential. The most surprising element of Maw’s considerable musical accomplishment is the lack of choral numbers with one exception. The crowded bar scene in Act III where Nathan humiliates Sophie saying how dare she live while millions of others died at Auschwitz is the only instance of a choral setting in Sophie’s Choice. This stands out oddly and raises the question about other choices Maw could have made, such as a choral scene among those going to or being held prisoner in Auschwitz.

Two small nits involve set and costumes. Initially the timeframe is blatantly posted and changed on the wall of the smaller stage as if the audience needed to keep the ‘Summer of 1947’ or the ‘Spring of 1946’ within view. Initially, Bothe uses the small stage as the present time of the opera, but when a flashback scene occurs, the characters slip down from the small stage to the actual stage floor. By posting the years on the walls, Bothe implies that he does not trust the audience to remember what Stingo has said as the action begins. The other small criticism is that Nathan appears on stage in a cowboy outfit, announcing that he and Sophie are wearing costumes from the 1930s. Sophie is wearing a dress of that period and so what costume designer Dorothea Katzer chooses for Nathan seems bizarre. Although Nathan is subject to crazy rages as part of his psychological illness, his madness does not include confusion about his personal appearance.