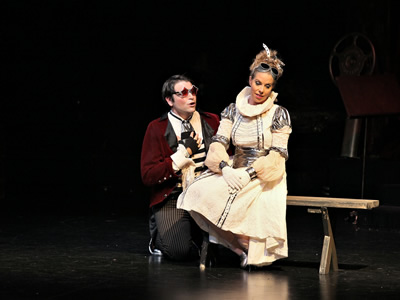 Julia Morgan Center for the Arts

For anyone who’s ever wondered if Jacques Offenbach can compose anything weightier than the “Can-Can,” the answer is: “Yes, he can!” His final work – and masterpiece – “Tales of Hoffman” is worthy to stand next to any lyric opera in the canon, as dramatic as most and, being Offenbach, more tuneful than some. A big work, with a large cast and four scenic locations, it has been done in most of the great houses of the world. And now comes little Berkeley Opera with a top notch production, in a small venue, with a unit set and some singers that could set you to dancing a can-can with joy. Bravo!

Offenbach and his librettist Jules Barbier, loosely based their opera on the real-life story of German poet and composer E.T.A. Hoffman, who died penniless after three disastrous love affairs (none of them with his wife), while incorporating characters and episodes from some of his writings. Hoffman wrote dark, fanciful fairy tales, the best known of which is “The Nutcracker Prince,” a watered-down version of which is the meal ticket for ballet troupes all around the world. The stories used in the opera correspond to three loves of the (fictional) poet Hoffman. They are: “The Sandman” (Olympia), “Councilor Krespel” (Antonia), and “A New Year’s Eve Adventure” (Giulietta) and they are dark indeed.

Hoffman’s first love, Olympia, turns out to be a mechanical doll. The second, Antonia, frail of health but still seeking to follow in the footsteps of her mother, a famous diva, sings herself to death (and beautifully, I may add) and the third, Giulietta, a Venetian courtesan, betrays him for a glittering diamond. The tales are framed by a drinking scene in a tavern where the poet relates his adventures to a group of increasingly inebriated friends. In the end he is deserted by everyone, his new love, the opera singer Stella, the drinkers, who move on to new amusements – everyone but his muse, who inspires him to redeem himself in poetry.

It’s a tall order for any opera company but Berkeley Opera proves itself up to the challenge. The cast requires four strong singers in the principal roles and several others in secondary parts. Outstanding are Angela Cadelago as all three heroines, baritone Paul Murray as four of the scariest villains you wouldn’t want to meet in a dark alley, and Nora Lennox Martin as Hoffman’s friend (and ultimately his muse) Nicklaus. Adam Flowers is adequate in the title role but is outclassed by the other three. Wayne D. Wong does a fine job as a harried bartender, a grieving father, a rejected suitor and a very funny robot. Sara Couden plays the bartender’s wife and later doubles in a gorgeous duet with Antonia as the spirit of her mother. One of the largest choruses ever to be seen on the small Julia Morgan Theater stage does yeoman duty as drinkers, party guests and whatever else is required of it. The whole thing is ably conducted by Ernest Frederic Knell, with stage direction by Phil Lowery.

Sometimes less is more and David Scott Marley’s clever new English translation cuts a lot of the fat, substituting spoken dialogue for recitative and eliminating whole chunks like a slapstick interlude for a bumbling butler in the second tale that can bring the proceedings to a grinding halt. His lyrics are clever (a reference to the failing Lehman Bank brought down the house) and readily understandable, with super titles above the stage just in case you don’t get them all. Set designer Alex Sardelich transforms the beer hall into a laboratory, drawing room and Venetian pleasure-palace with a few pieces of furniture and minimum of fuss. Costumes, by Emilica Sun Beahm, are pretty great – except for the hero who is fitted out in a fuchsia coat and striped shirt and what appeared to be gym shoes. And, if anyone can tell me why almost everybody had enormous spectacles attached to the tops of their heads or hats, I’d appreciate it.

But all this is quibble next to the amazing success of this production. Offenbach, of course, is the real star and his music is lilting, soaring and rapturous, depending on the occasion. The Olympia scene is very funny – as it is meant to be. The Antonia segment, which for my money has the loveliest music in the score, is truly moving and the scene where Giuletta steals Hoffman’s reflection to pay the price of a bauble is chilling. “Tales of Hoffman” has just about everything you could want in an opera – except the Can-Can. –