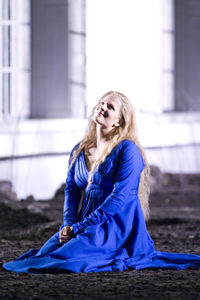 Graham Vick’s production had a number of such odd moments: people popping in and out of holes in the ground, swords waving in the air for no apparent purpose and a ring of fire encircling the Act One confrontation between the hero and Venus that made you a little nervous about his shirt or her sheet going up in flames. But musically the thing was glorious and that’s really why we go to the opera, isn’t it?

The story of the knight who is led astray by the Sex Goddess, only to be redeemed by the love of the innocent maiden who prays for him is a bit anachronistic in our own “Sex and the City” times. It is however firmly rooted in a deeply Christian milieu when women were virtuous and gentlemen were expected to forego the pleasures of the flesh (the pleasures of the flesh, by the way, were something Wagner was famously familiar with) in favor of courtly – and chaste – devotion. The two heroines here illustrate the dichotomy of a certain view woman, either Madonna or whore, with nothing in between. They are extremes, symbols of pure virtue and vice, with little personalities of their own.

Gone are the days of the hefty Wagnerian soprano. Both female leads, Petra Lang as Venus and Petra Maria Schnitzer as the saintly Elisabeth, were lithe and lovely. Schnitzer’s voice, from her opening greeting to the hall of song to her final, prayerful death scene, was superb. Peter Seiffert was a fine Tannhauser, the man caught between the heat of his flesh and the salvation of his soul, never losing the audience even during his long narrative at the end. But James Rutherford nearly stole the show in the role of Wolfram, the loyal friend who worships the virtuous Elisabeth from afar, his famed “Evening Star” a thing of shimmering beauty. Eric Halvarson did his usual yeoman service as the Landgrave.

The San Francisco Opera Chorus was another shining star of this production. The Act Two Entrance of the Knights was a show-stopper, occasioning wild applause – generally a Wagner no-no until the end of an act. But again, it was marred by the visuals. This time the costuming was at fault. The men looked fine in their tunics and boots but the large contingent of women choristers were dressed identically in white wimpled dresses with silly little crowns on their heads. Credit costumer Christopher Verdosci for that, as well as Venus’ sheet, useful only for the somewhat jarring moment when she flashed her lover (fortunately with her back to the audience). Nevertheless, for all its faults, “Tannhäuser” was a transcendent musical experience. And, if you didn’t like what you were looking at, you could close your eyes and be transported to a Wagnerian heaven. Not bad for a night’s work.