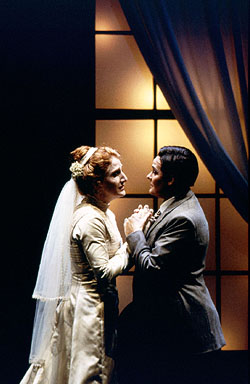 The Capulets and the Montagues are families well known from Shakespeare, and their clan-crossed lovers, Romeo and Juliet, are the iconic embodiments of young love–love that resists family prohibitions even if the results are tragic. Bellini’s 1830 opera is not based on Shakespeare’s play, but, depending on which authority you choose to accept, either on an 1818 play by Luigi Scevola or a 16th century story by Matteo Bandello, thought also to be Shakespeare’s source. The location is the same, Verona, as is the essence of the story. Felice Romani’s libretto gives prominence to the character of Juliet’s fiancee, Tebaldo, so that the rivalry for Juliet’s favor becomes a stronger plot element.

Bellini’s captivating bel canto melodies, frequently heard in regular repertory performances of Norma, La Sonnambula and I Puritani, are much in evidence in this less often performed work. Written for Venice’s carnival season in just six weeks, it was, nonetheless, an enormous success at the time. A current resurgence of interest in the work is evident, perhaps stimulated by the bicentennial of the composer’s birth.

The current outing at New York City Opera is a new production created in partnership with Los Angeles Opera, Minnesota Opera, and the New Israeli Opera. The time has been set forward to 1910, which, seen from the 21st century, seems sufficiently distant to accommodate Bellini’s romanticism, far removed from the irony-laden, self-reflexive styles of our times. As it turns out, the 1910 period is utilized primarily in the costuming, including the men’s chorus of courtiers in white tie, initially met reading their newspapers. The sets consist of projected backdrops of various cloud formations, columns which are rearranged from time to time, the occasional architectural element, and one painted drop of red trees against a blue sky. With little effort, one could imagine a dozen other operas which could easily adapt to such a design: economical, generic, uninspired and uninspiring.

The standard of performance, fortunately, transcended the standard of design. As Giulietta, Mary Dunleavy displayed a superb instrument in full control of the demanding flourishes and fioriture of the bel canto score. She can spin out a pianissimo high note and effortlessly swell into a big, full voice which retains a pleasingly buttery texture. Her singing conveys a full range of emotion, delivering passion with conviction.

In the pants role of Romeo, English mezzo-soprano Sarah Connolly was a match for Dunleavy in instrument and technique. Her phrasing and musicality were seamless throughout, but, alas, little passion was evident. Connolly’s expression seemed little different whether she was singing, "I love her more than the sun" or, having failed in a bid for peace, warning the Capulets that "only God will choose between us." Only in the poignant last scene did convincing emotion creep into her delivery.

Raul Hernandez as Tebaldo offered a smallish, but pleasing tenor sound and an intelligent characterization of the army officer who is an unwanted lover. John Marcus Bindel was a gallant Lorenzo and Jan Opalach an appropriately stubborn Capulet.

Thor Steingraber’s stage direction was imaginatively effective, including various deployments of the formally clad chorus and the effective funeral cortege, seen in silhouette, bearing the drugged Juliet to her tomb.

At this moment of history, it may have been an unwelcome reminder to New York opera-goers to hear a plea for peace rebuffed, with an entire chorus responding, "We stand with one voice shouting WAR!" But, delivered in the irresistible tunes of Bellini, even those lines are hard to fault. It was the great librettist Arrigo Boito who said, "Who does not love Vincenzo Bellini, does not love music."