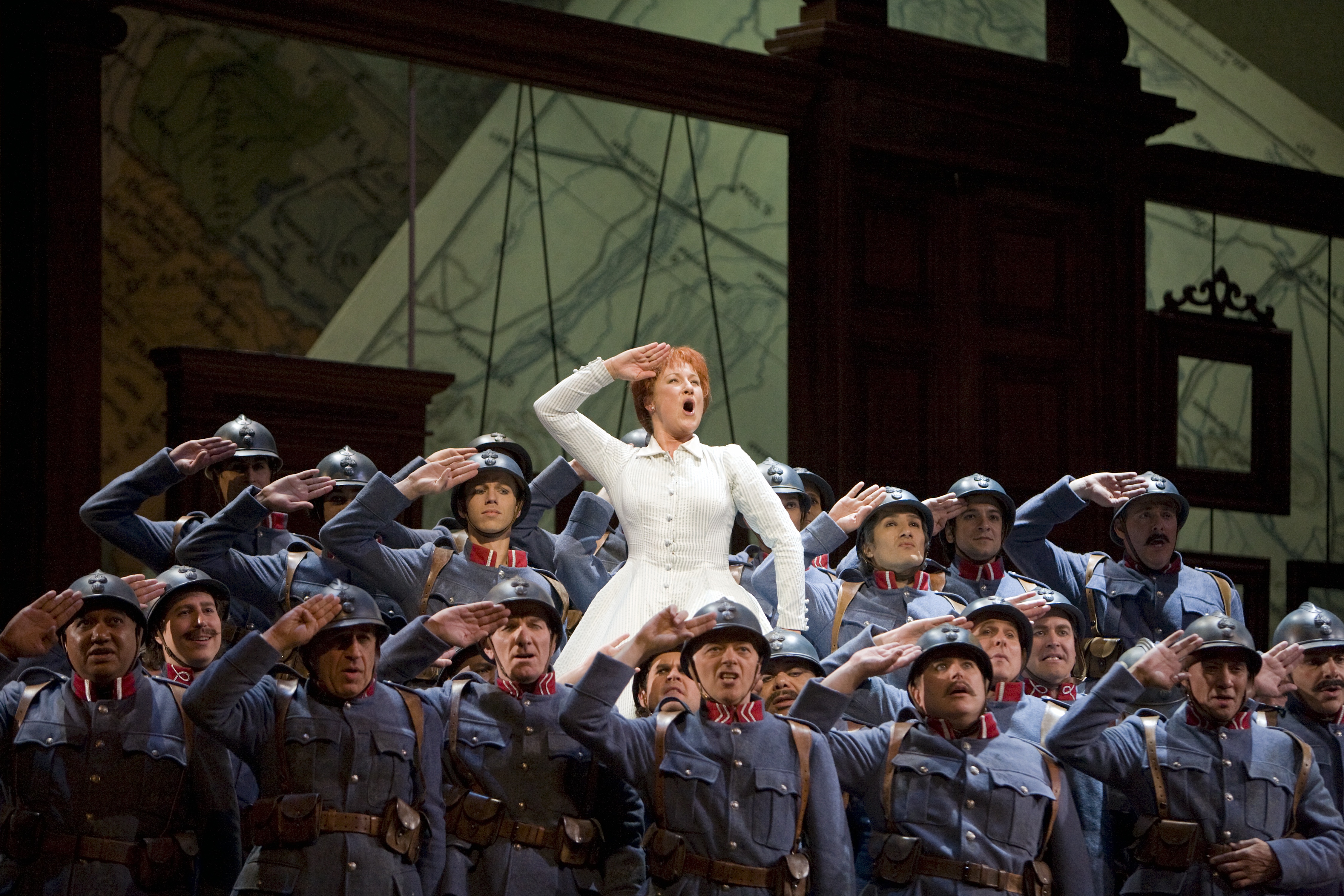 The Daughter of the Regiment

The high C’s go through the roof but the laughs reach as low as you can get. Laurent Pelly’s charming production of Donizetti’s “The Daughter of the Regiment” combines physical slapstick and vocal pyrotechnics for a fresh look at this 1840 staple of the operatic repertoire. A shared production, it already has been seen in London, Vienna and, most famously, at the Metropolitan Opera in New York, which filmed it for movie houses and later broadcast on Public Television. This “Daughter” has been around and anyone who saw the Met film might not think anyone could ever be as good – or better – than Natalie Dessay in the role of Marie, a foundling raised by a French military cadre as the ultimate tomboy only to be thrust into high society by a wealthy aunt. Think again.

Enter the divine Diana Damrau. Paired with Juan Diego Flores as the Swiss bumpkin who loves Marie – yes, the same Flores who gave the famous encore of his showpiece aria at the Met and made the front page of the New York Times along the way – Damrau makes certain that the San Francisco version takes a back seat to none. Already a force on the international soprano scene, Damrau is late in coming to San Francisco but no less welcome. She brought down the house on opening night. She and Flores make a good-looking couple (even when she is in overalls and T-shirt and he in ridiculous lederhosen) and they are not afraid to ham it up, which this production requires in spades.

An excellent supporting cast, headed by Bruno Pratico as a brusque sergeant and Meredith Arwady as the snooty Marquise of Berkenfeld helps a lot. Arwady is especially funny and, when she opens her mouth in Act Two and belts out Dalila’s aria from “Samson et Dalila” just for fun, you realize she has the vocal chops as well. Sheila Nadler has a very funny bit in the speaking role of Duchess Krakenthorp (you can tell by the names that Donizetti didn’t intend for his opera to be taken too seriously), Marie’s prospective mother-in-law.

The tale of thwarted young love and pretentious aristocracy reminds one a bit of Offenbach’s “The Grand Duchess of Gerolstein,” (which Pelly staged in Paris five years ago) and also, with its happy peasants and marching soldiers, more than one Gilbert and Sullivan show. A really clever translation, with some new dialogue by dramaturg Agathe Melinand, keeps the laughs current. Act Two features a hilarious ballet by bored housemaids during the overture, which is reprised when the equally hilarious aged wedding guests totter in a little later. But, never fear, Marie will not have to marry the rich Duke Krakenthorp in the end. She is saved by the regiment and, her lover Tonio but I’m not going to ruin it by telling you how.

A note on the music, ably conducted here by Andriy Yurkevych. Some of it is downright funny, like the Swiss bird-calls in the overture to Act One or the ad infinitum repetitions at the opening of Act Two. Most of it is sprightly, like the famous “Rataplan” and the regimental song. But some of it is absolutely gorgeous. As a case in point, Damrau delivered an exquisitely sung farewell to the troops as her aunt prepared to drag her away from the only home she ever has known. Never mind that she was dragging a clothesline hung with undershirts behind her with every step. If you want subtle nuance, go see “Pelleas and Melisande.” But, for a good time, call “The Daughter of the Regiment.”