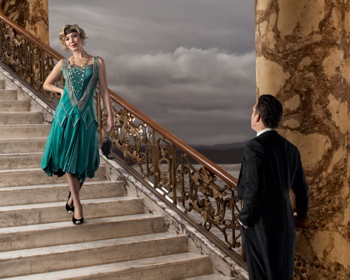 Now that’s what I call an opera, old sport. Ensemble Parallèle, San Francisco’s scrappy little chamber opera ensemble specializing in contemporary works, has mounted a lavish, polished production of John Harbison’s “The Great Gatsby” in a reduced re-orchestration by Jacques Desjardins that hits all the right notes. Performances are fine; there is an onstage jazz band, complete with crooner (Mark Robinson), and an eight-person team of dancers who Charleston and fox trot away while everybody else fakes it beautifully (Tom Segal, choreographer). Matthew Antaky’s scenic design and Christine Crook’s costumes are an Art Deco feast for the eye. And, to top it off, the Novellus Theater at Yerba Buena Center for the Arts is a perfect size for both audience and performers.

Harbison’s 1999 work ran once at Lyric Opera of Chicago and twice at the Met and then fell into obscurity for a decade. The new orchestration, a co-commission with the Aspen Music Festival, is designed to change that, making the opera available to smaller companies with more limited resources. A gripping story, based on one of the iconic books of the 20th century, it deserves a wider audience and now it just might get it.

If anybody out there still doesn’t know, “Gatsby” is the quintessential portrait of “The Jazz Age,” the period after the Great War and before the Great Depression when music played merrily, gin flowed free and women – called flappers – hiked up their skirts, bobbed their hair and did things that would have had their mothers split their corset stays. Jay Gatsby (Marco Panuccio), a self-invented millionaire with shady connections to the underworld, has built a mansion across the lake from the home of Daisy Buchanan (Susannah Biller), a self-involved socialite who was his one and only love before she married another. Gatsby is determined to win her back and she, disillusioned with wedlock, is not unwilling. Observing and commenting on the action is Nick Carraway (Jason Detwiler), a wealthy friend of both Gatsby and Daisy and the only fundamentally decent human being in their whole upper-crust bunch. The other side of the tracks (referred to as “The Valley of Ashes”) is represented by Myrtle (Erin Neff) and George (Bojan Knezevic) Wilson. George is a simple garage mechanic and his upwardly mobile, discontented wife has become the mistress of Daisy’s husband Tom (Daniel Snyder). The romantic entanglements end up in tragedy on both sides of the social divide.

Rounding out the cast is Julienne Walker as Jordan, a friend of Daisy’s who becomes Nick’s love interest. The chorus of party goers is terrific as is conductor Nicole Paiement’s orchestra. Harbison’s jazz-inflected score is easy to listen to and has a certain urgency that propels the action along. Alternately lyrical and menacing orchestral interludes cover the swift scene changes from Buchanan’s living room to Wilson’s garage to Gatsby’s ballroom and back. The scenery is aided by video projections by Austin Forbord. Sometimes the videos take over, such as water rushing over Gatsby as he sings his first big aria or a pair of omnipresent eyes on a billboard (supposed to be the eyes of God watching these foolish sinners but actually a bit heavy-handed). This and Panuccio’s rather weak portrayal of the title character are about the only flaws one could pick out. So, nothing’s perfect – but Ensemble Parallèle’s “Gatsby” comes pretty darn close.